Amsterdam has been one gorgeous city today. The low sun of September pierced my eyes with its silvery light. I was taking photos, yet I could barely see what I was taking photos of. I only wanted to capture that blessing light and the mood of this easy-going Saturday afternoon. 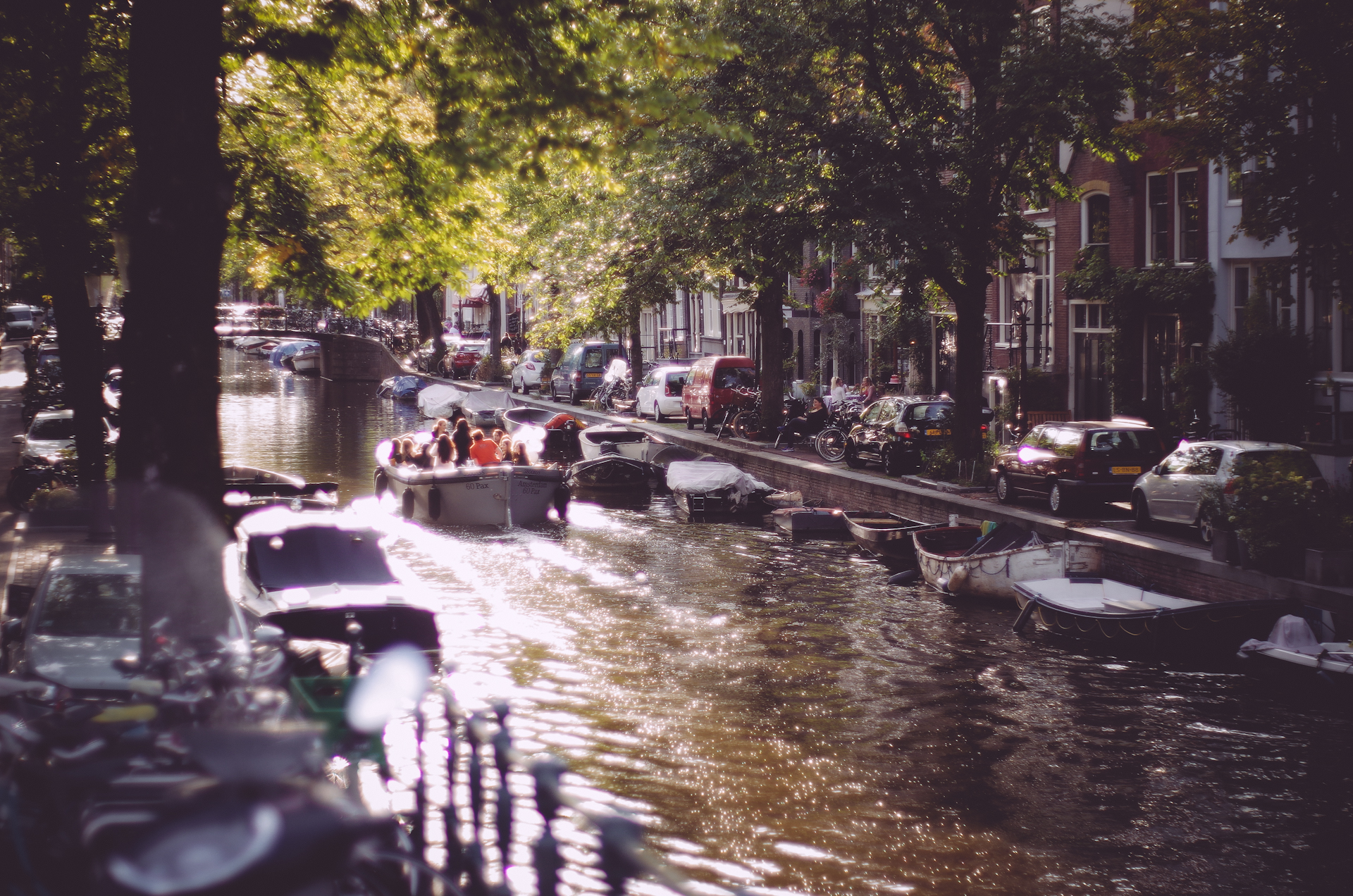 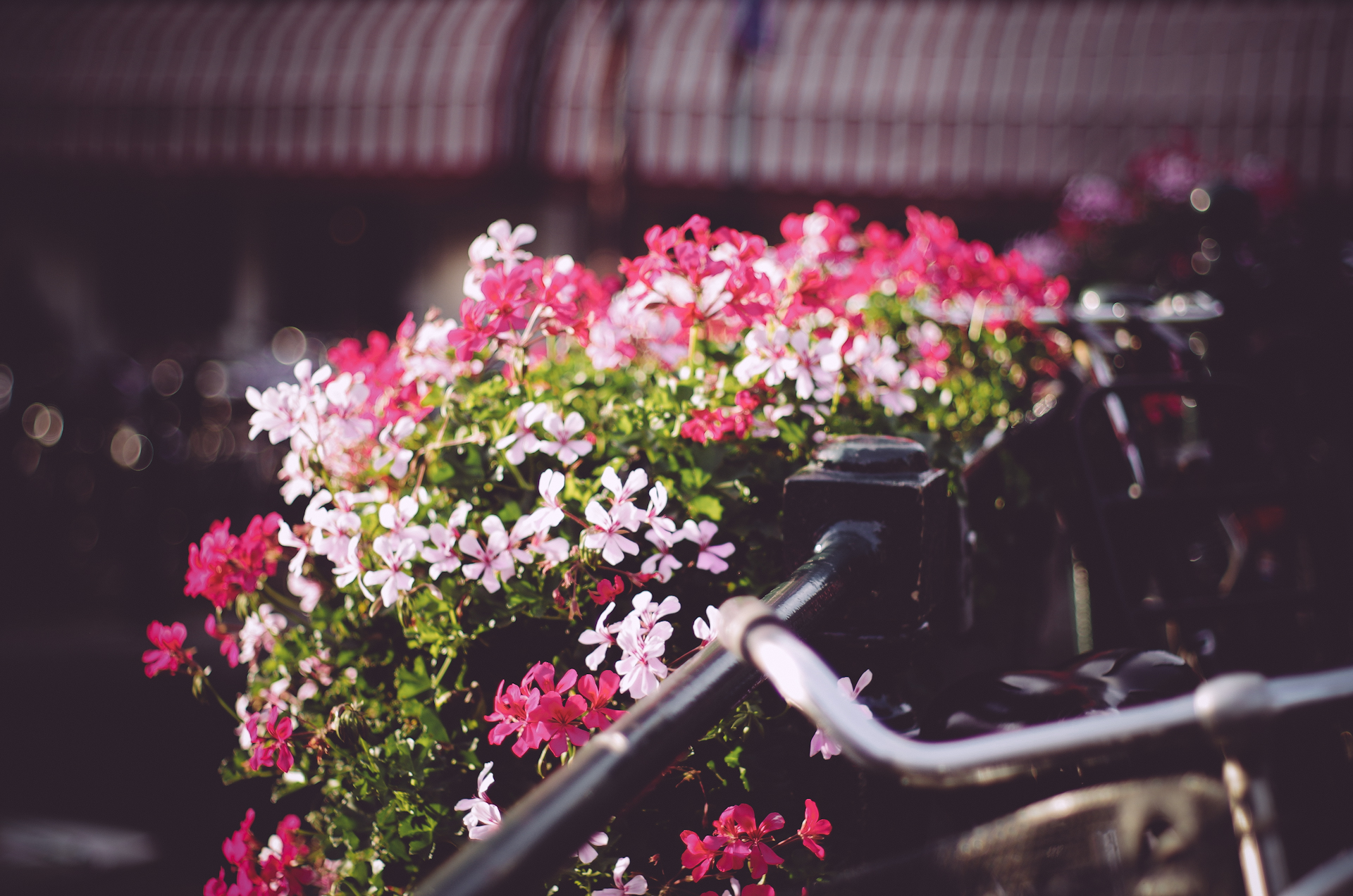 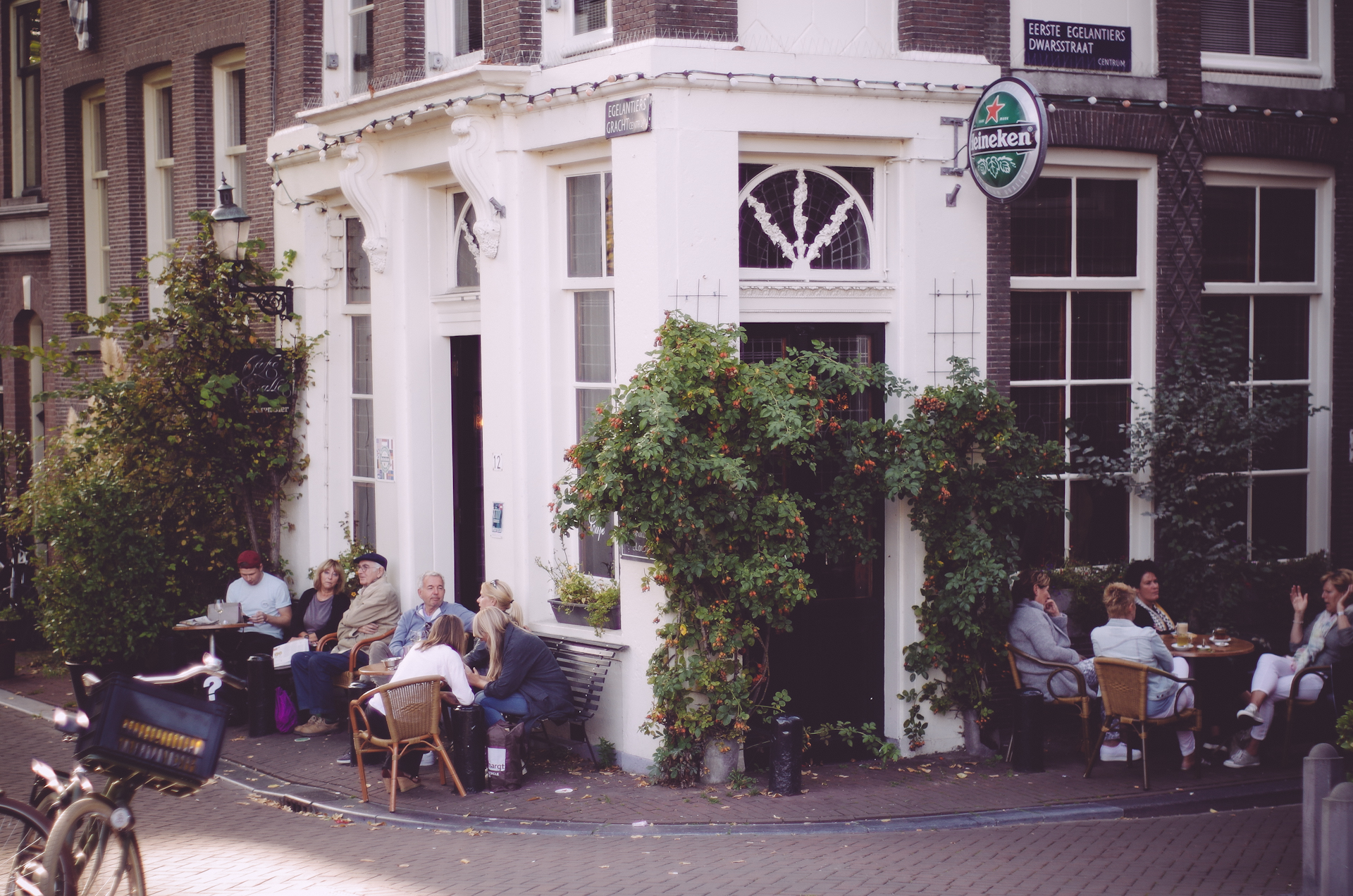 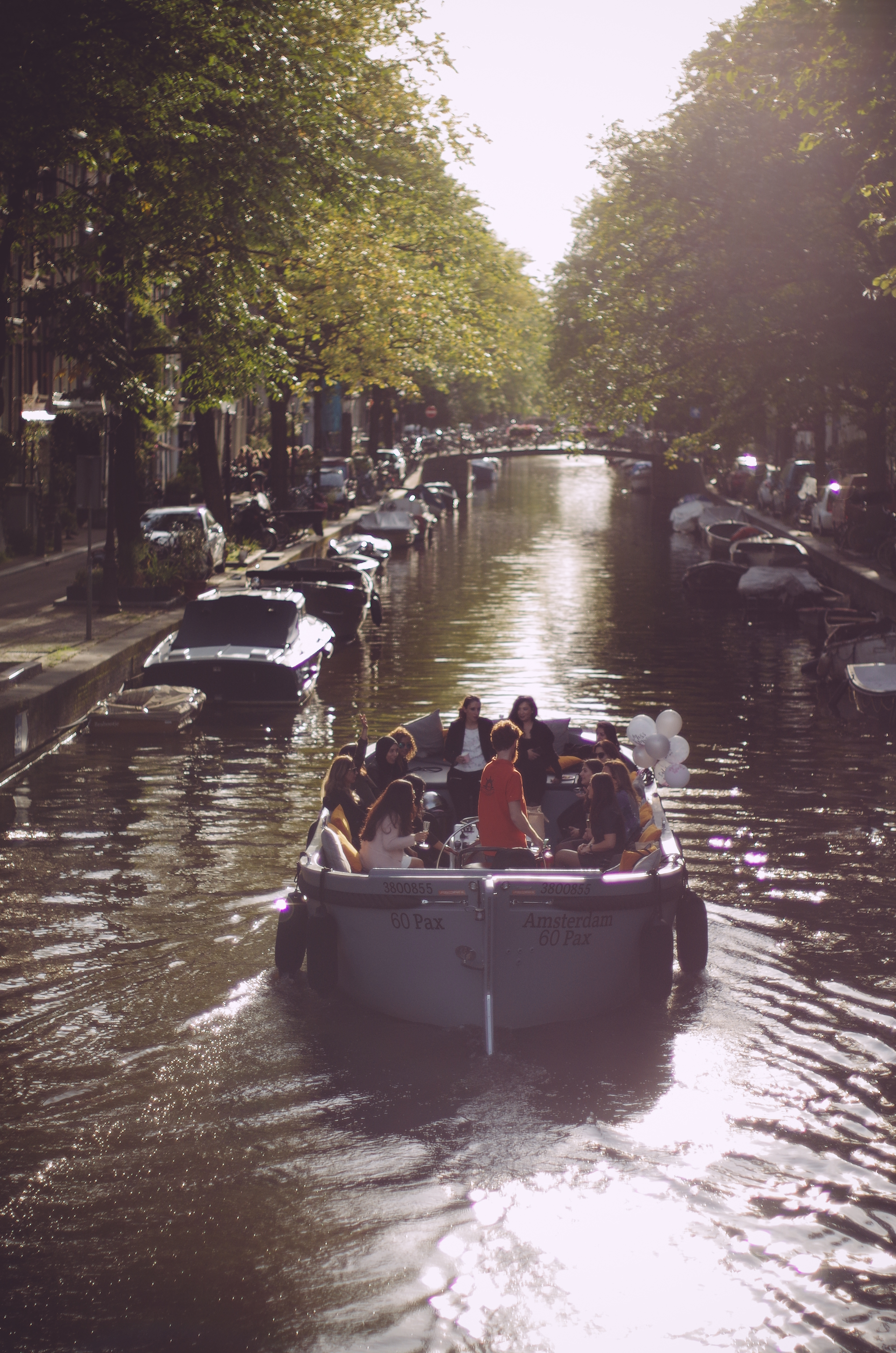 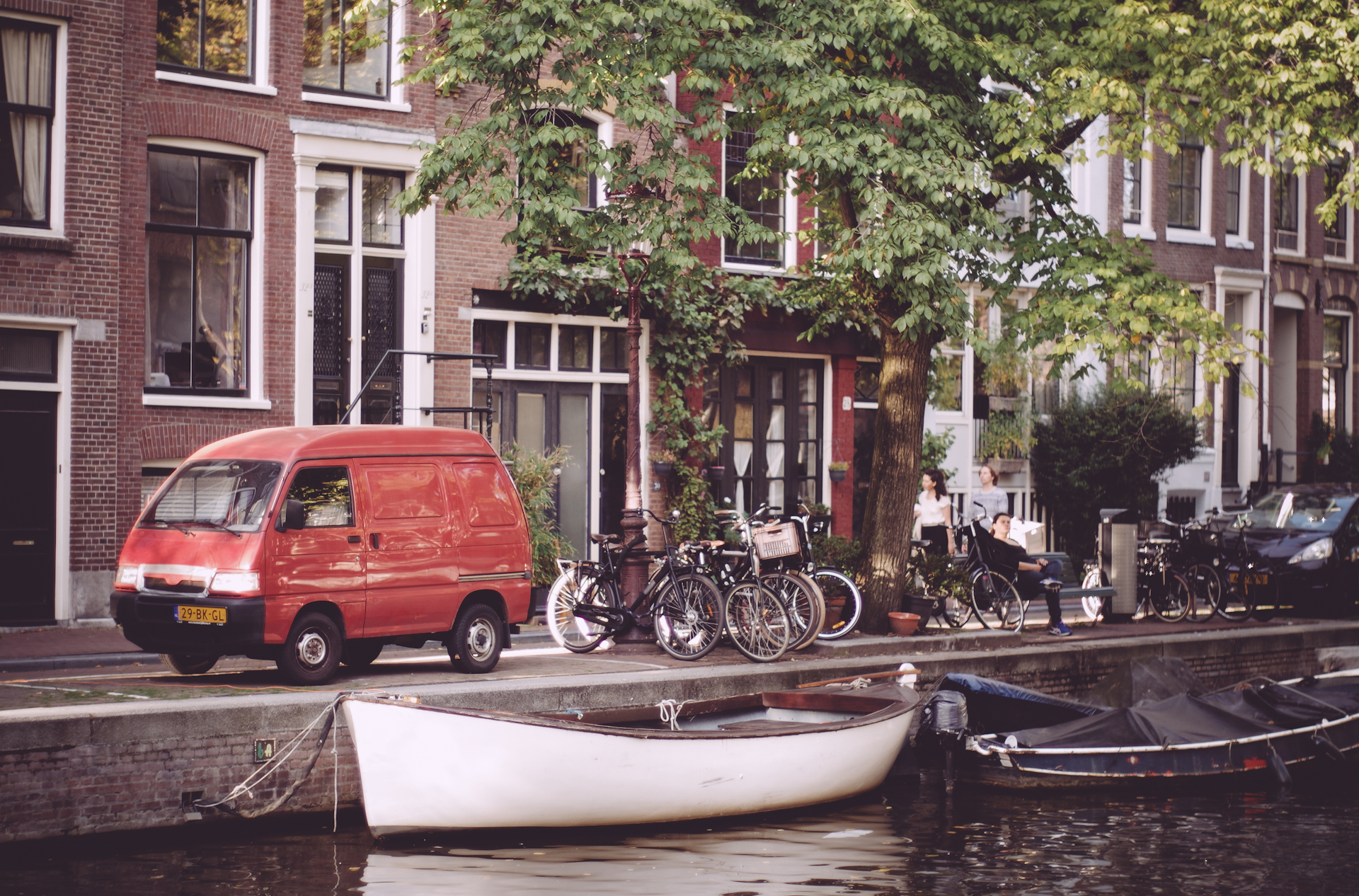 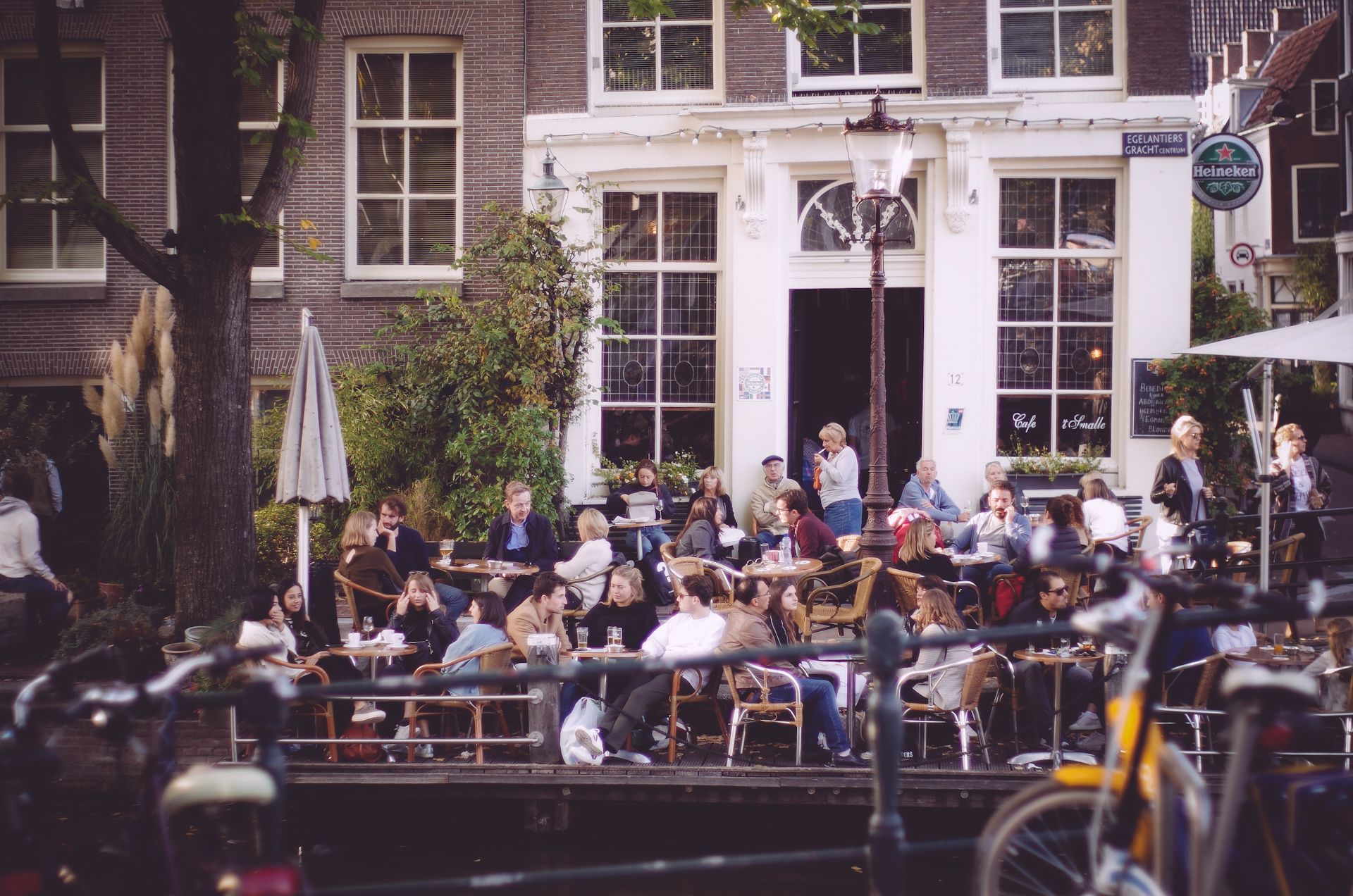 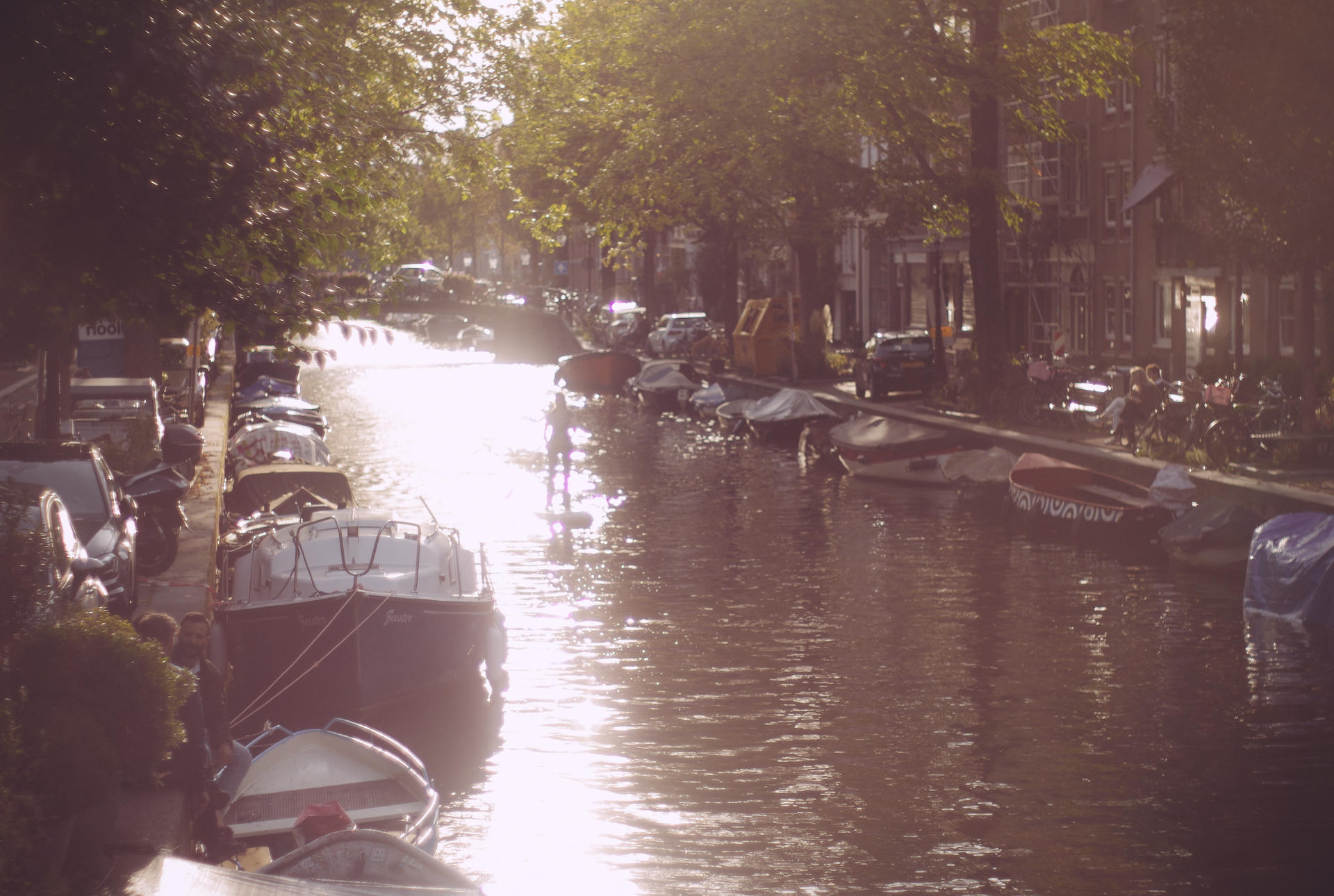 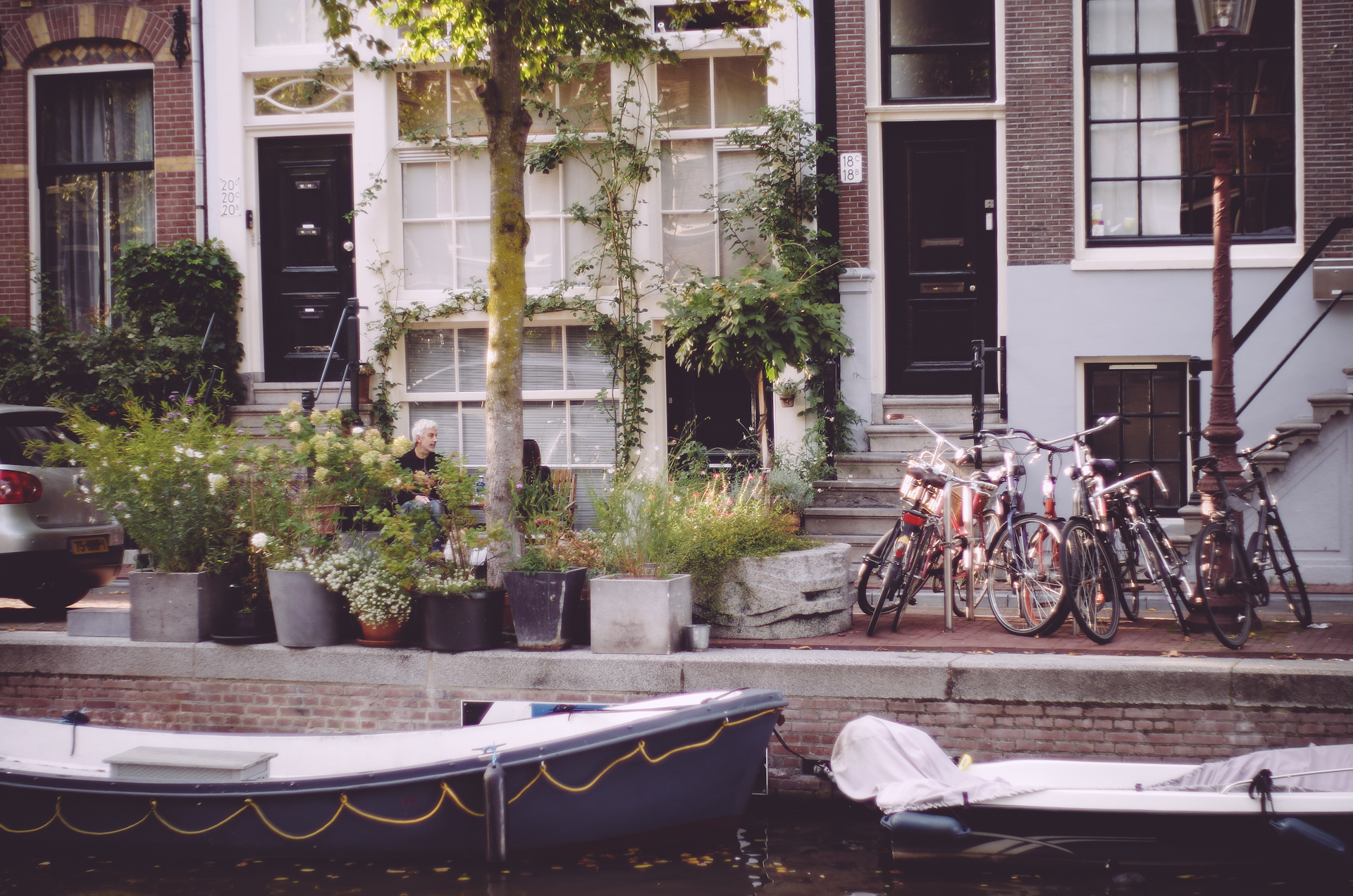 Alehandra and I had a late lunch of pizza and wine in the Jordaan, catching up after not seeing each other since maybe July. When you show up in between meals, La Perla can be such a nice place to indulge in food and conversation. The light poured through the windows and I felt I could spend the rest of the day at that table, talking to my friend and throwing looks at the young couple on a date at the table next to ours. 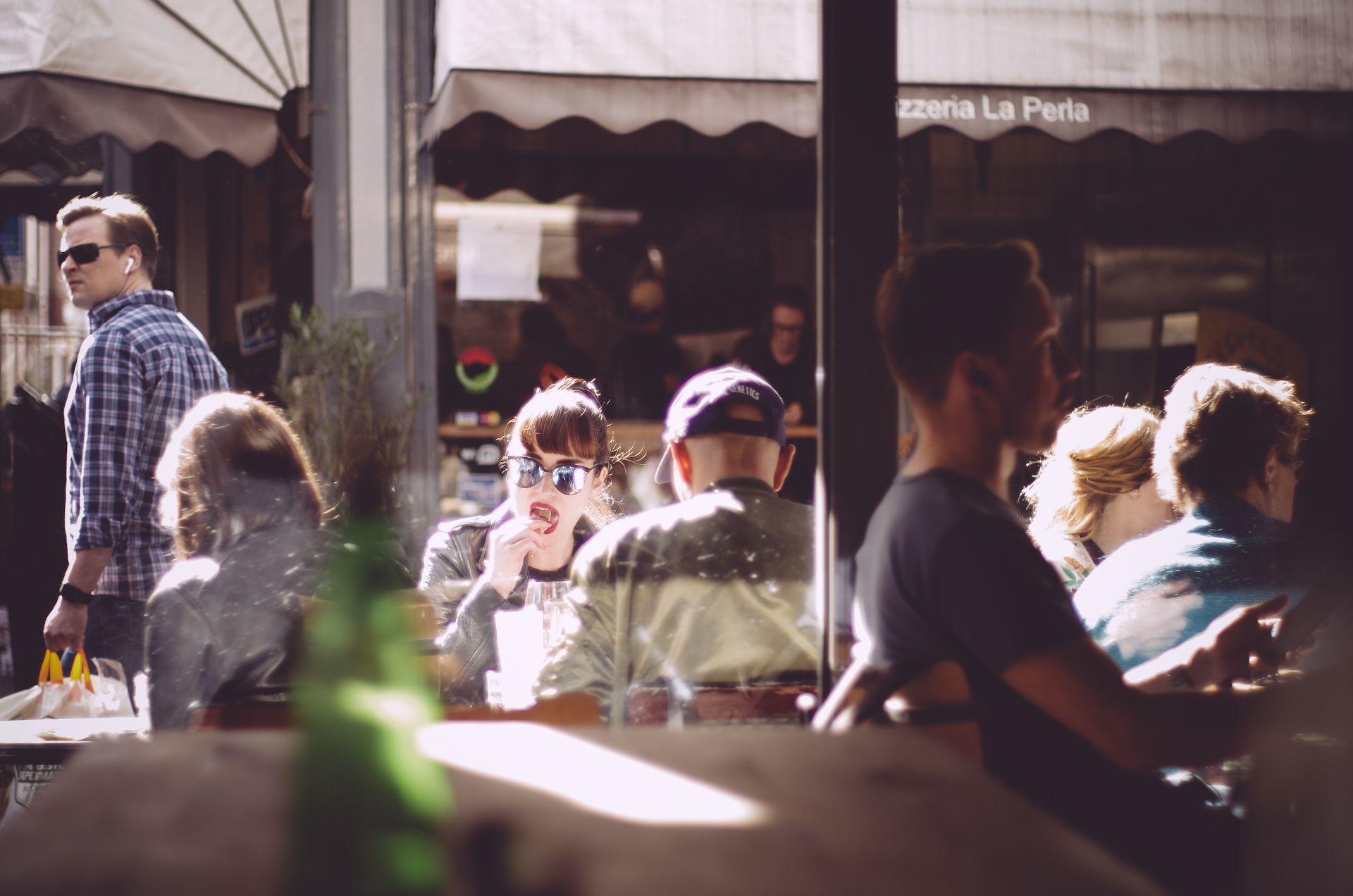 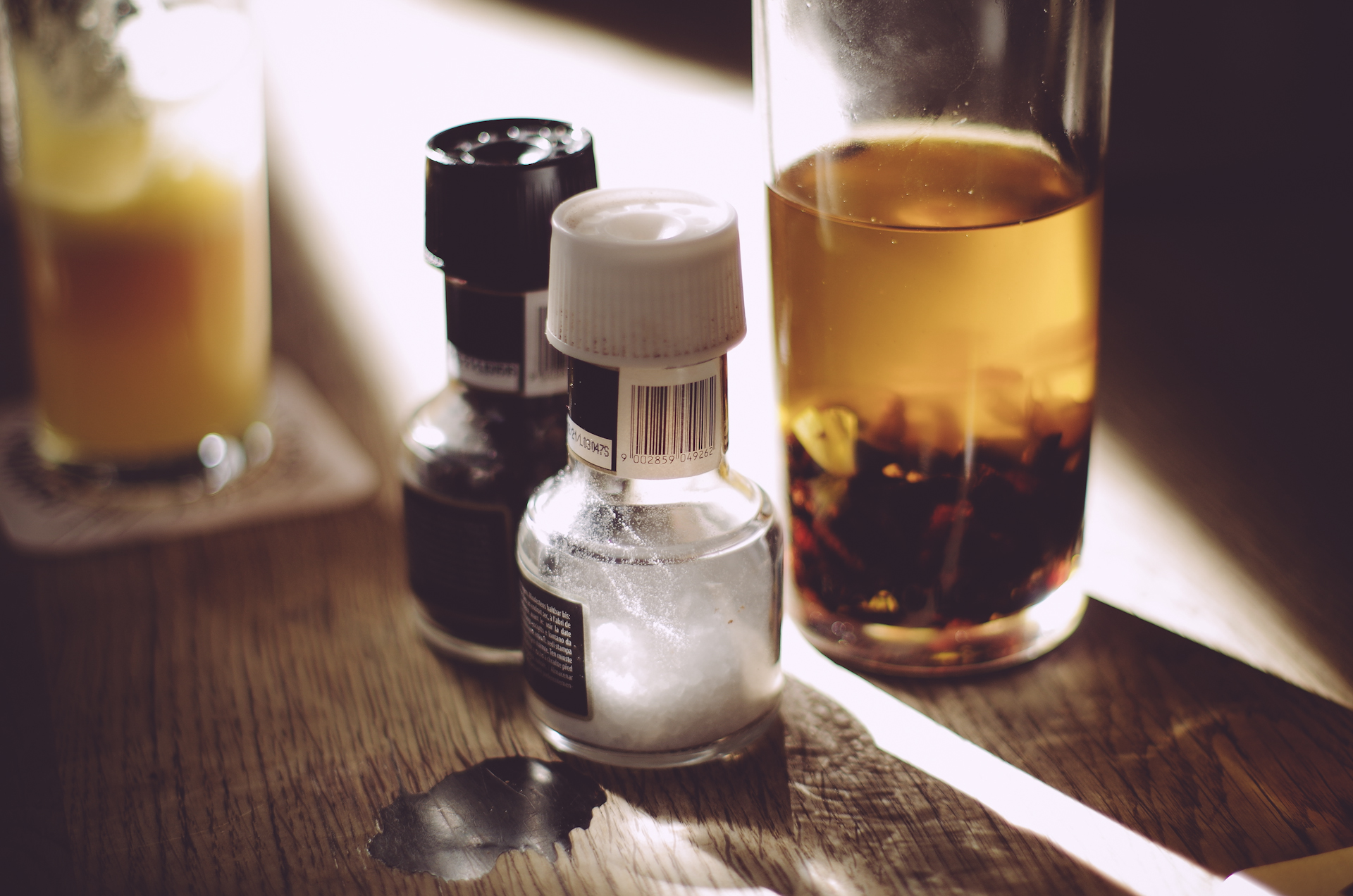 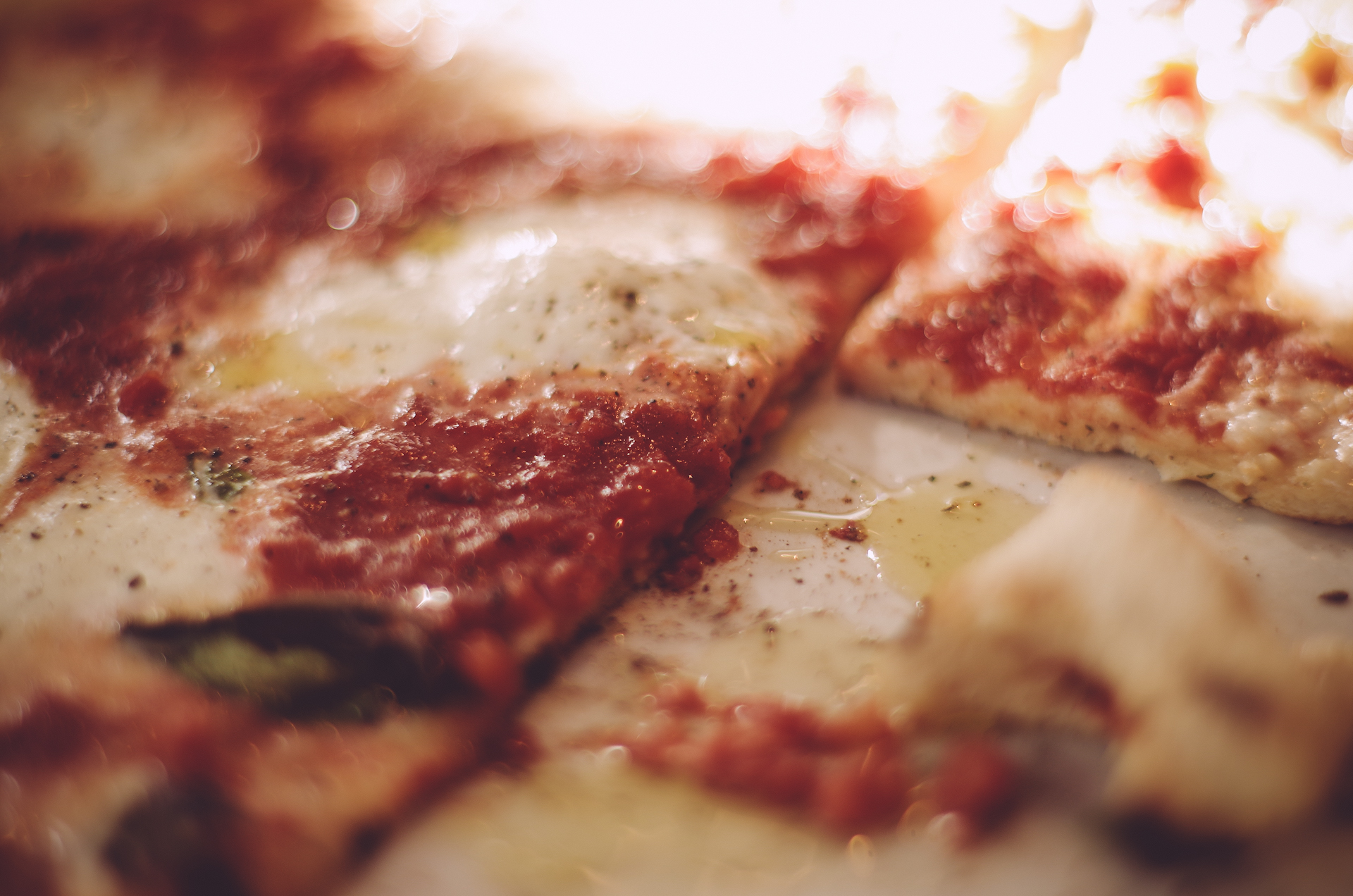 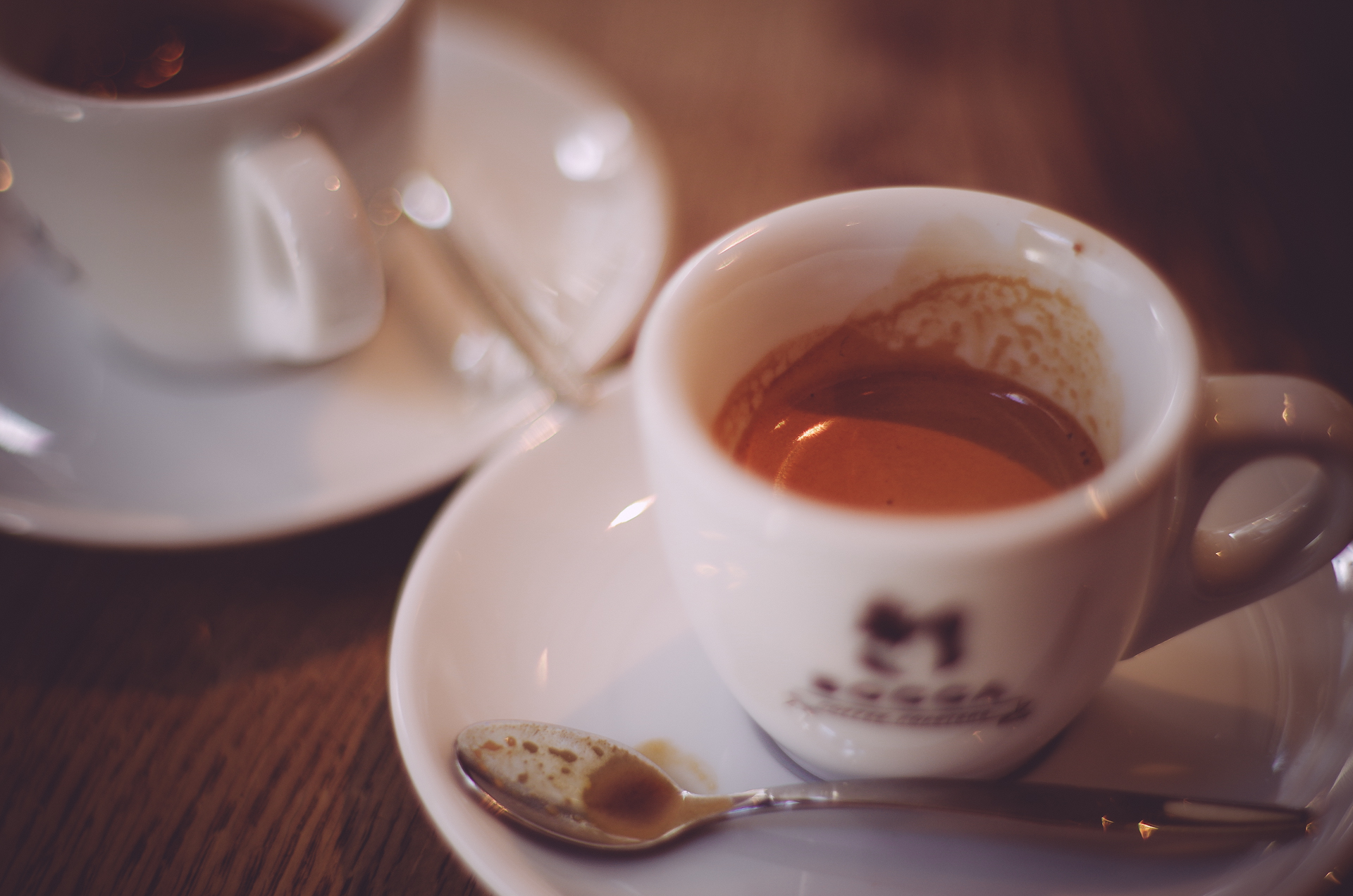 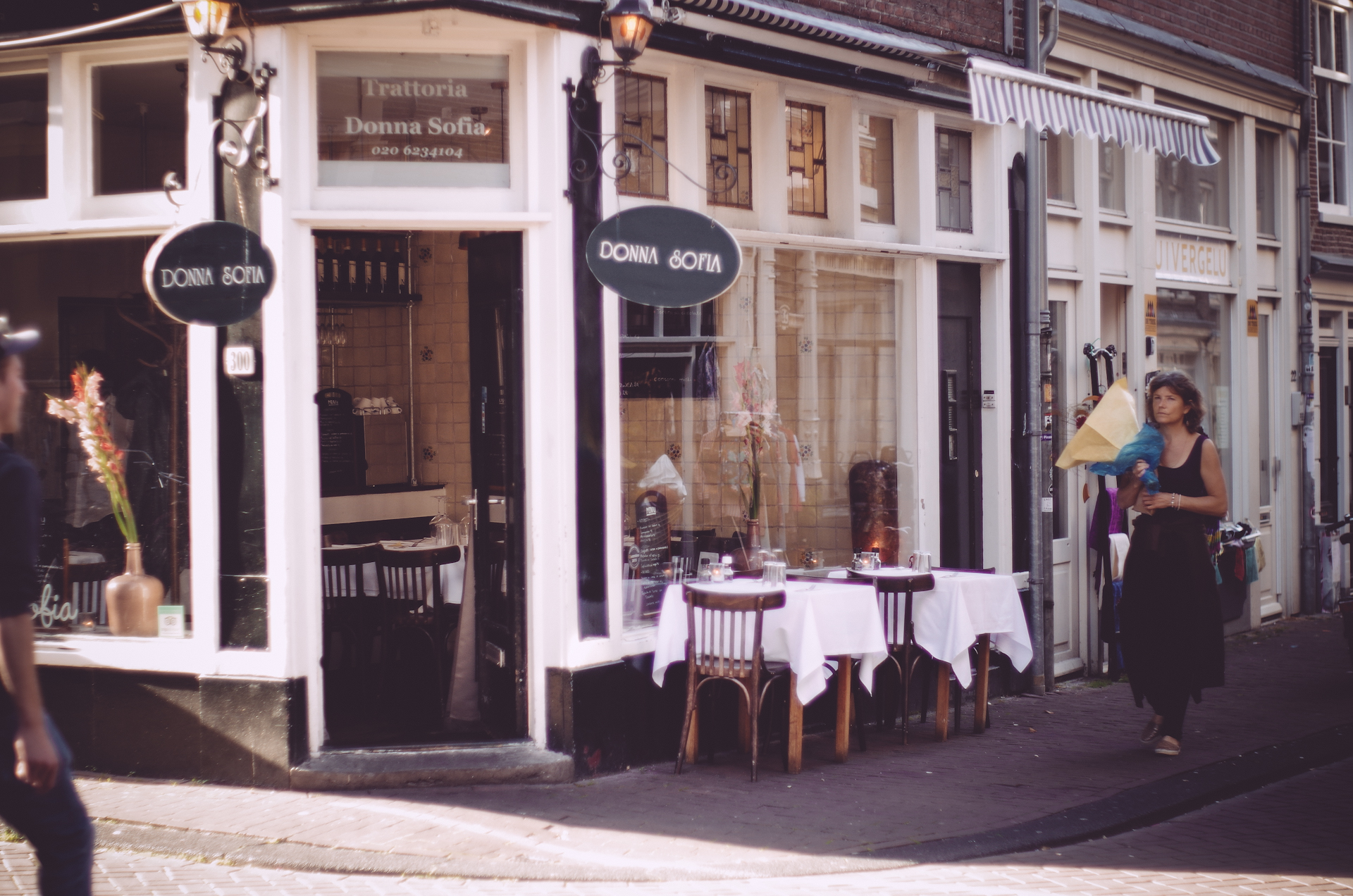 Monte Pelmo, the go-to ice cream shop in the Jordaan, was just a few blocks away.
“What the hell is advocaat?” Alehandra asked while we were queueing, pointing at some yellow tinted ice cream.
“I think it’s a liquor or something.”
She did not look convinced.
“Oh, it has egg in it,” she said after a quick Google search. “I’ll have some.”
I went for a classic: pistachio.

Ice cream in our hands, we walked along the Westerstraat, looking for somewhere to sit which was not a terrace. We found the rim of a shop window and sat there, sun on our face. Terraces of bars and restaurants were busy with people enjoying drinks in the sun. Dog walkers were walking dogs, and shoppers were walking shopping bags full of groceries. We were just licking ice-cream.
“I like Westerstraat. It’s ugly and we need more ugly Amsterdam. It adds character,” I said.
“I like it, too.”
“I meet Jharda for a movie at seven. Dirty Dancing. Wanna come?”
“Dirty Dancing? Nice!” she said.
“Come with us!”
“I’d love to. But I have painting lessons tomorrow and I need to prepare.”
“Ah, too bad. Anyway, I can’t wait to see this movie again. First time on the big screen.” 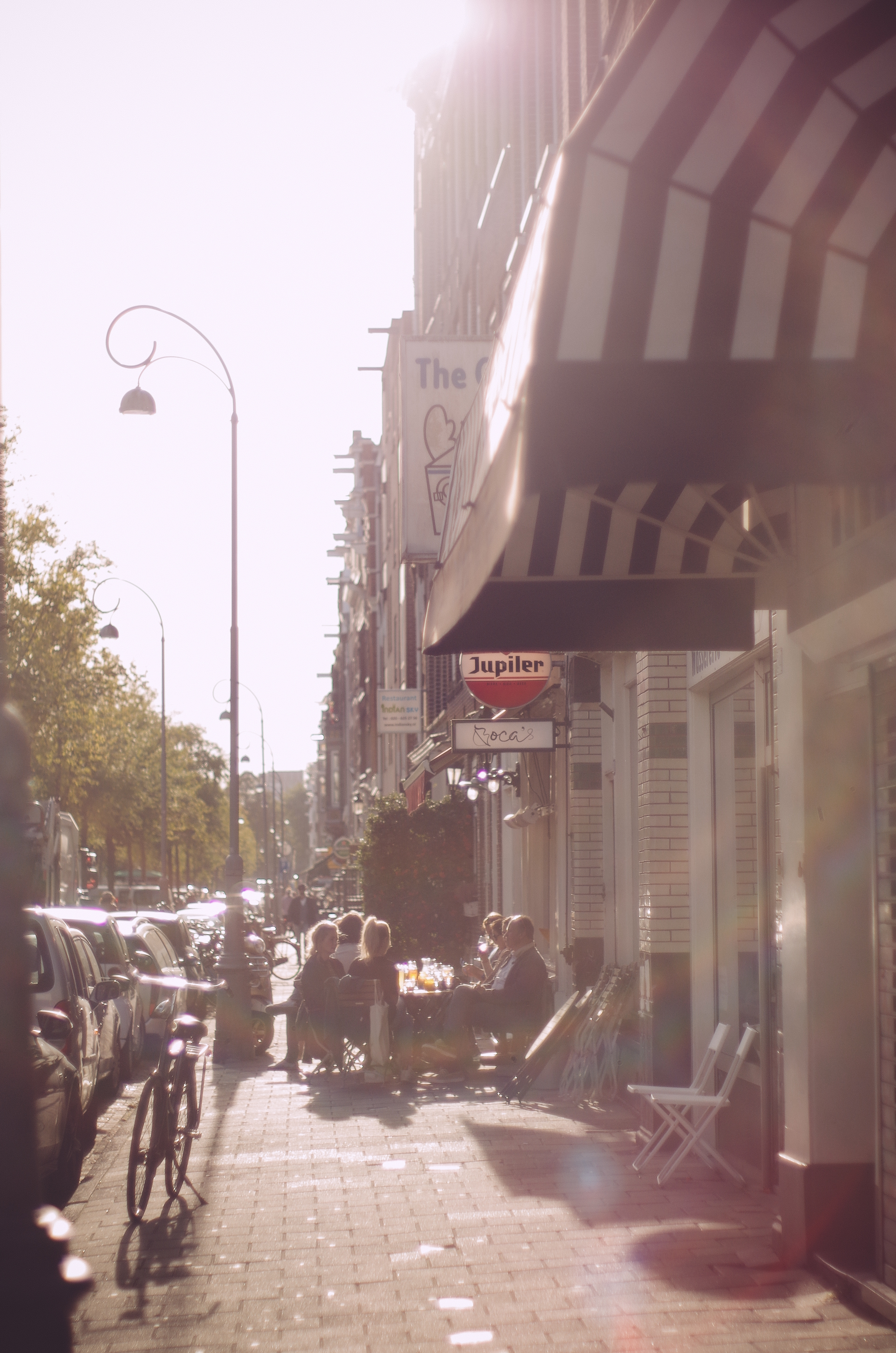 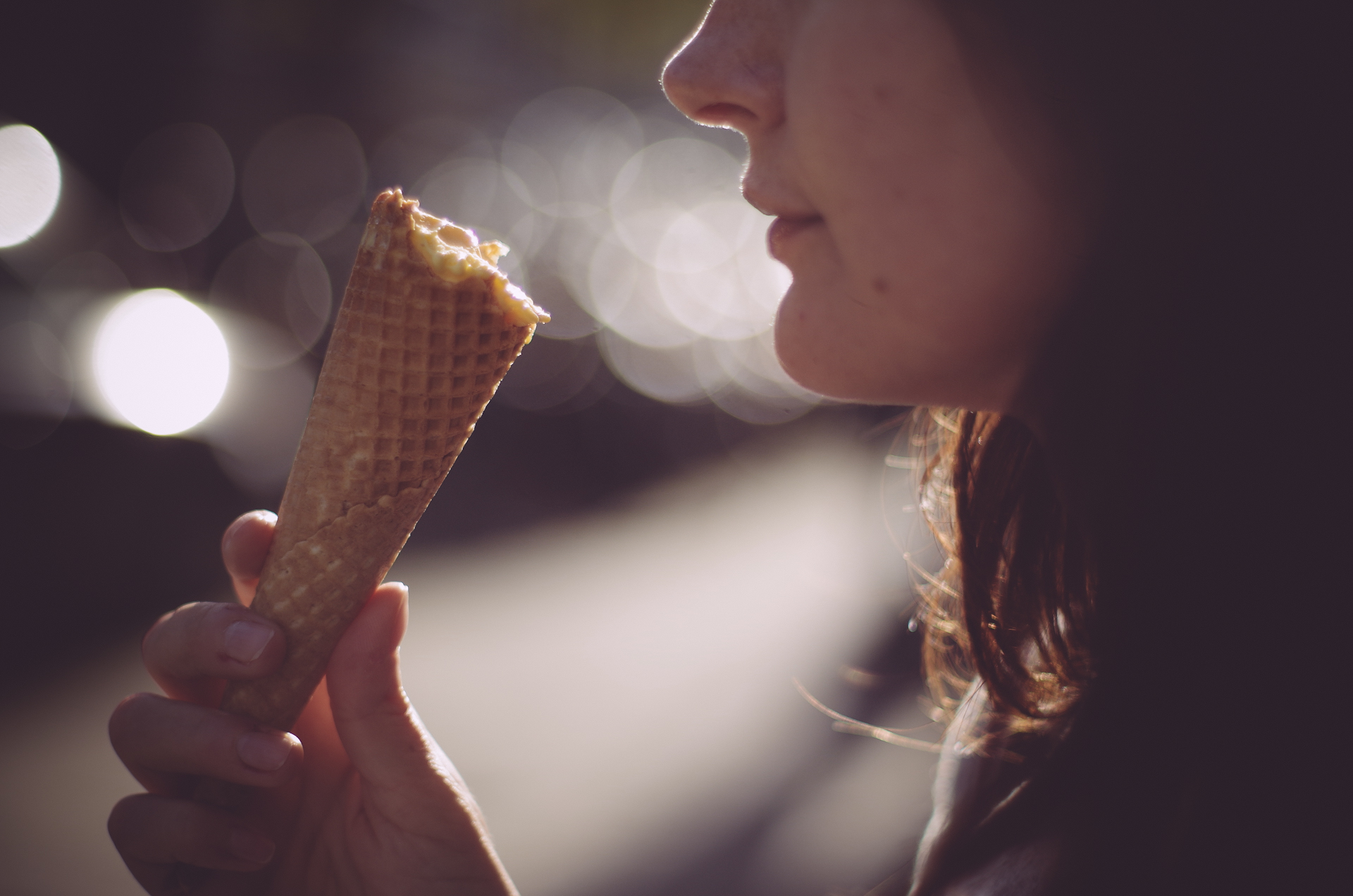 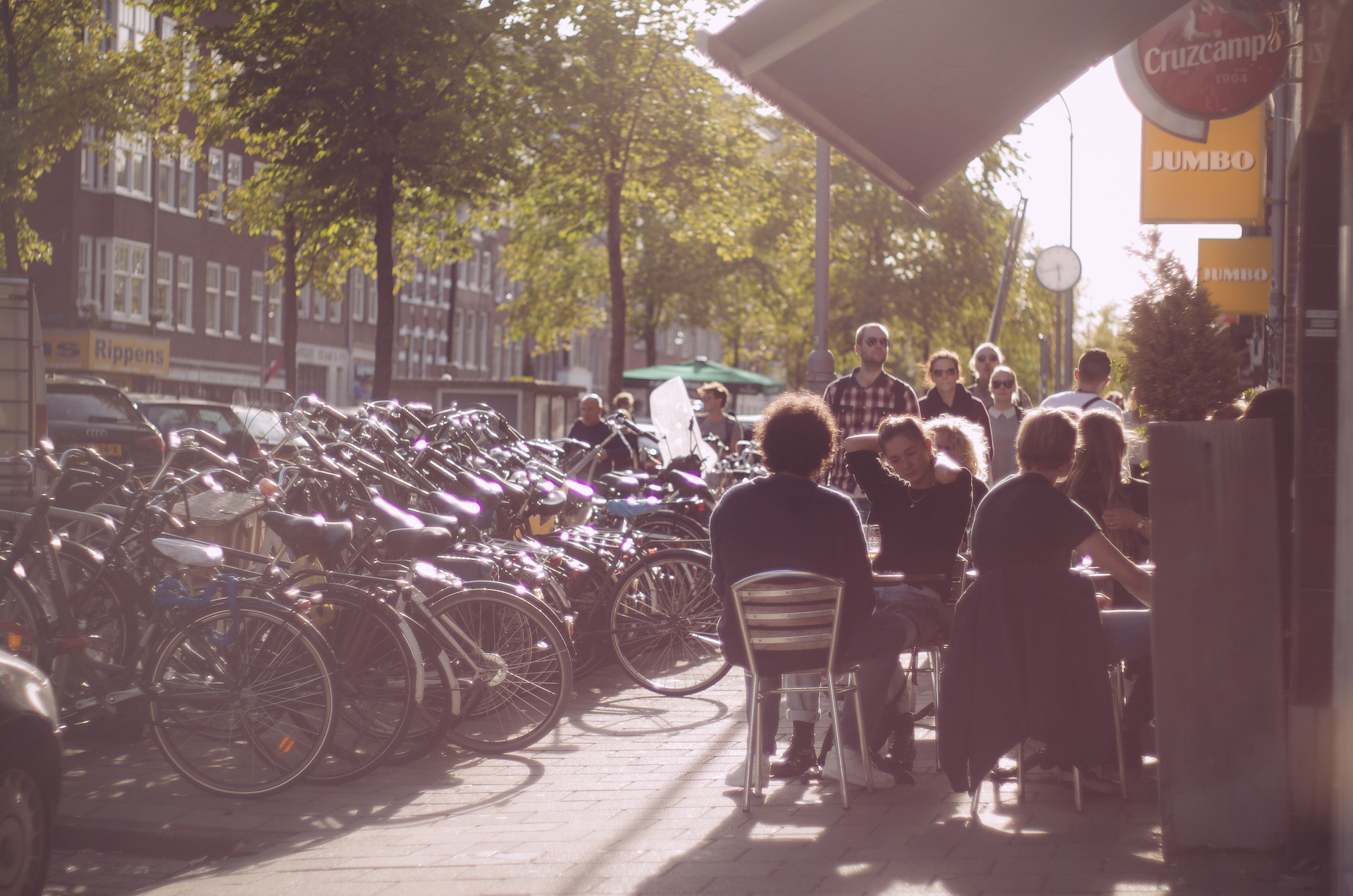 I walked with Alehandra back to where she had parked her bike. We were on a quiet side street in the Jordaan, just the two of us, when we saw a guy looking into his phone, concentrated, as if searching for something. Light-hearted from wine and sunshine, we felt chatty.
“Nice hair,” I said after we passed him by.
“Too bad he is glued to that phone.”
“And with earphones on, too. Lost to the world.”
“And he rides a bakfiets. Red flag, red flag!”
We laughed. Alehandra stumbled on a brick in the street.
“Damn! I almost broke my leg.”
“This is what happens when you look after boys, Alehandra!”
We laughed some more.
“Seriously. I have a pain in my heel and one in this bone, here.” She pointed to her back.
“Twisting one’s neck while looking after boys. Isn’t this how the saying goes?”
“Twisting one’s neck and breaking one’s back while looking after boys.” 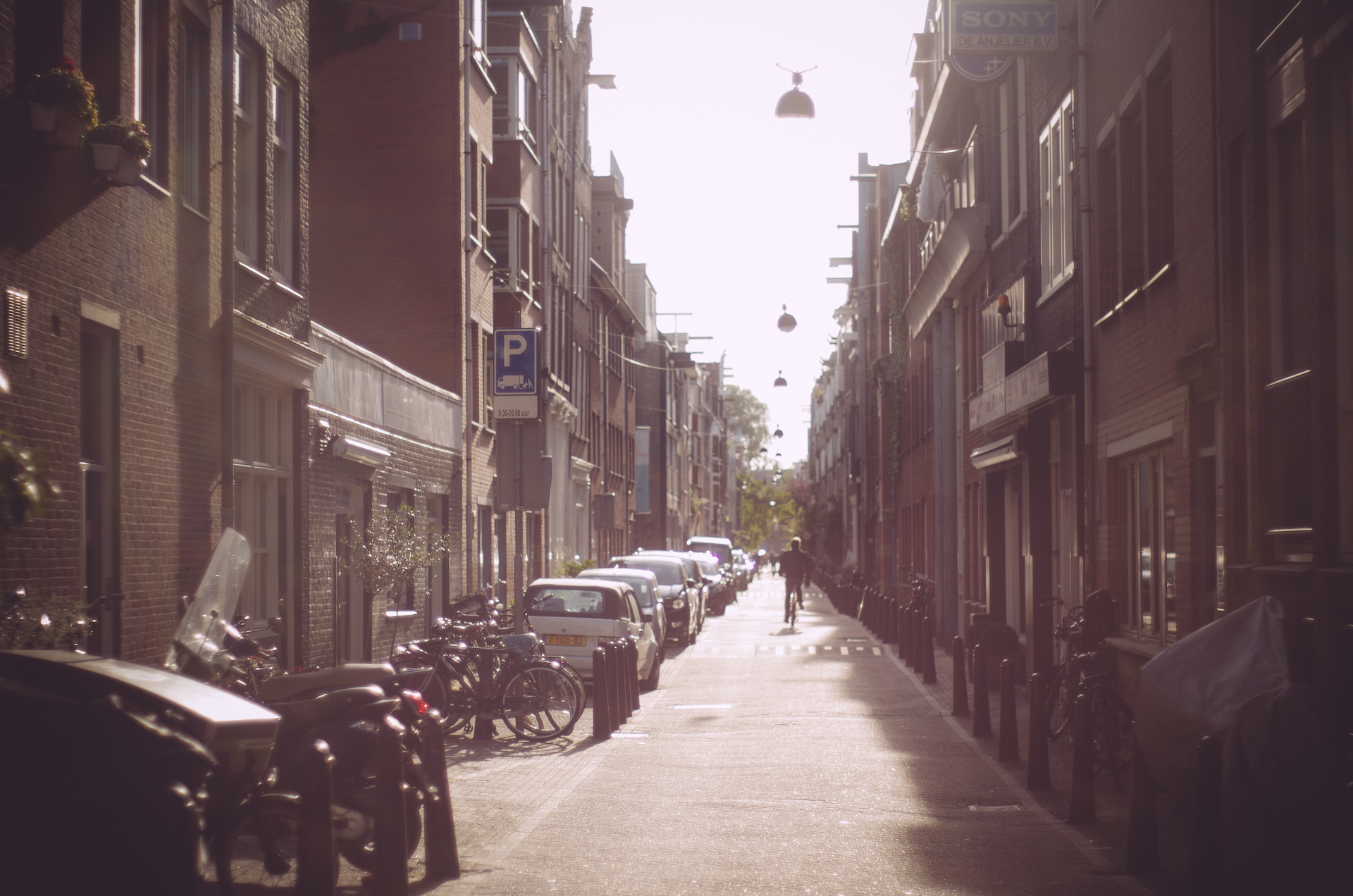 On my way to Cinecenter, I texted Jharda.
“Coming toward the cinema. You?”
“I’m a bit drunk. But yes, I can come.”
Twenty minutes and the movie would start.
“What you prefer? I can go home instead.” I could indeed picture myself going straight home and call it a day. I had seen that movie already anyway. I could watch it again on Netflix or something.
“Oh, but then I’d feel bad!” Jharda’s answer came. “Especially if you’re on your way already. I’m not far from the cinema.”
“Then come!” Yeah, we should go. It was Saturday night, for God’s sake. My bed, book, and evening tea could wait.
“I will.”

I arrived at the cinema before Jharda and went to the bar to get a drink. I fancied a cup of jasmine tea, but hell, it was too warm for tea. And it was Saturday night. And I was about to see Dirty Dancing. I needed something better than tea. I ordered an IPA, thinking that one glass of red wine and one beer in a day did not hurt anyone. Jharda said she would be there at seven sharp when the movie started. I gave her my seat number and told her she could find me in the room. I don’t like to show up late, not even at the movies.
We sat in the third row from the screen, with no one in front of us or anywhere close to us. Perfect.
“I can’t believe we see this movie,” I said.
“Me neither. So strange, right?”
“So strange I need to watch it with glasses now. I did not need glasses back then.”

As it happens at cinemas, just when the movie was about to start and I was happy not to have anyone invading my personal place, a guy threw a bag on the floor at my left, then threw himself on the seat next to me. Great. And he was chewing gum. Perfect.

Commercials were over and the movie started. The black and white, slow-motion images of the dirty dancers, sensually invading each other’s personal space, arching backs and lifting legs. The song, sending me back to high-school, when I first saw the movie, on videotape: “The night we met I knew I needed you so, And if I had the chance I’d never let you go.” Jharda and I could not refrain from making some exaltation sounds, like groupies, covering our eyes to avoid more embarrassment. Dirty Dancing. We were seeing Dirty Dancing.
“I’m gonna have to warn you that I’ll be singing a lot during this movie,” Jharda whispered.

Sometimes during the movie, I realized Cinecenter had become my living room. Sad nights and happy nights, like the one I was just having, both found me there, a drink in hand, a movie on the screen. Lately, Jharda had become my companion for this favourite activity of mine, in this favourite cinema of mine.
“Why do we always come to see this kind of movies together?” I asked her during the hot, “Cry To Me” scene. Jharda shook her head and laughed. I asked her a similar question during the “Hungry Eyes” scene. I almost could not stay still during that one either.

“You must stay for a cigarette,” I told Jharda as we stepped out of the room at the end of the movie, eyes still blurry. I knew Jharda had plans, but my plan was to not face the world just yet.
“Sure, honey. Let’s get a drink from the bar.”

We took the drinks and went outside to smoke. Saturday night in Amsterdam’s centre. The air still mild. A concert at the Melkweg. Cinecenter getting crowded for the 9 pm movie. Tourists on pilgrimage at the Leidseplein.
“I think dancing like that is better than sex,” I said.

With that conclusion in my mind and with “Hungry Eyes” in my ears, I got in the tram back home and started to write this.