Spending winter holidays at my boyfriend’s family in England feels like wrapping myself in a warm blanket. Not only because the house is cosy and comfortable, but especially because they are a family where chit-chat and giggles are the way to be. In such pleasant environment, one time per year, I feel like a child again. There is somebody else to look after everything else, I can just be and enjoy.

We flew to Birmingham last night and, for the fifth year in a row, it all went according to the habit. Tom’s parents came to pick us up from the airport, we hugged, we went to the car, Tom’s mother queued to pay for the parking. We then drove home, catching-up and briefly discussing the plans for the coming days.

It was past 11 PM when we arrived home. The Christmas lights were on, the house warm and the carpets as soft and fluffy as I could remember. We brought the luggage upstairs, to the bedroom, then had some late dinner – fish and chips we had picked up on our way – in the living room, by the fireplace and the Christmas tree. There was football on TV. 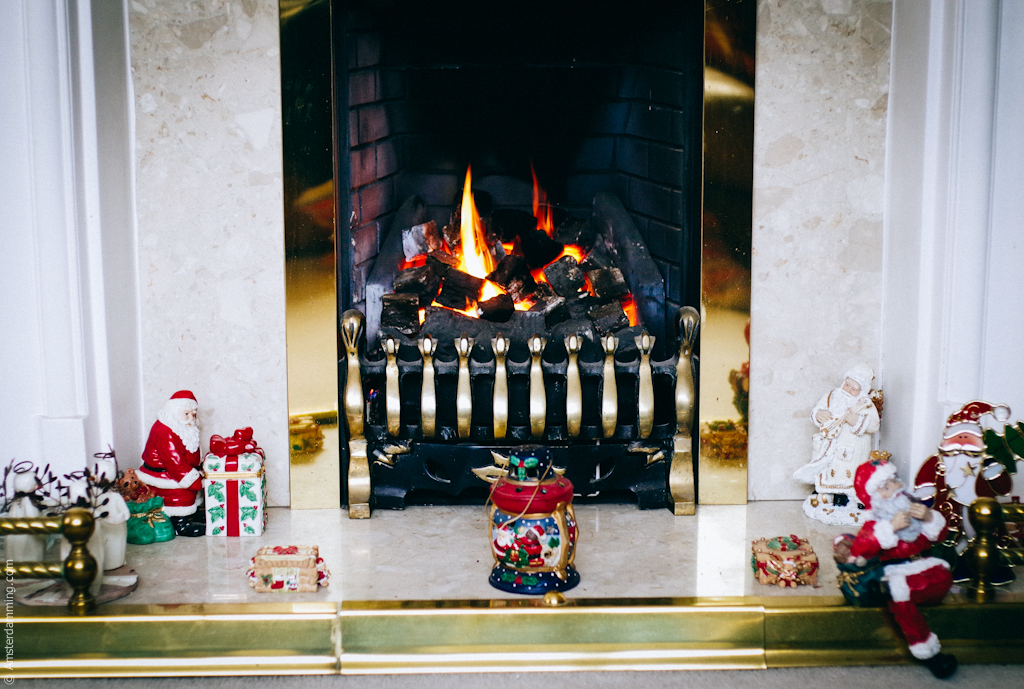 Watching television is such a treat for me. I associate it with visiting my mother in Romania – her TV on the kitchen counter is always on – and with coming to England for the winter holidays. If in Romania the news is horrible and the stupidity of the TV shows makes them impossible to watch, in England, especially because of the special time of the year we’re here, it is all about Christmas: cooking, traditions, decorations, music. And football, lots of football.

Sitting by the fire, eating fish and chips and watching television felt good, soothing almost. It reminded me of my friend Anca, whom I met in the Danube Delta when I was about 6. Later on, when she moved to Bucharest for work, she rented an apartment from an old lady, close to Romana square. The location was great, the apartment was decent, but she did not have a TV. So whenever Anca visited, she would go adrift in the middle of the conversation because a commercial on the screen would get her attention. My sister and I would joke about it and Anca would tell us how horrible it was not to have a TV. Last night I got it. There is something about watching TV after long periods of forgetting about its existence. Watching football on TV is even more revelatory. It’s like seeing people dancing without hearing the music. Players running after the ball, supporters looking tense, commentator speaking fast, and all I was asking myself was: why? Why run after a ball? 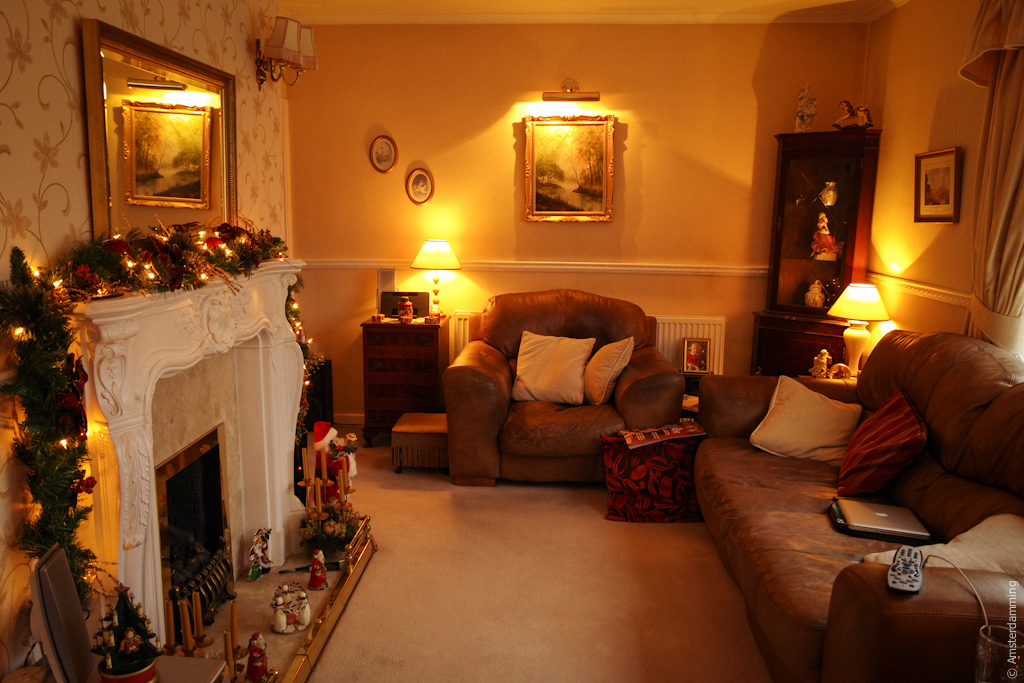 This morning Tom’s grandmother and his two aunts came to visit. They do this every year around Christmas. The living room was flooded with light and cheerful voices. On one armchair, his grandmother, an 88-year-old lady, content and serene, in a red, Christmasy cardigan on top of a grey dress. On the sofa, Tom’s mother and her two sisters. On the other armchair, Tom’s father, and next to him, by the door, right next to the chocolate corner, Tom and I. We were the ones to talk the least. I was not shy or intimidated, I was comfortable. They were sharing funny stories about friends and relatives and just hearing them talking made me feel happy and safe. I wished my family for once would trade dramas for such niceties and easy going chats.

One thing we do at the beginning of our holiday here is grocery shopping. Have you ever been to an English supermarket? To say they are overwhelming is, well, an understatement. There is so much choice, I could spend an hour just deciding what yoghurt to get. Grocery shopping is important. We need to make sure there’s plenty of fruit and some vegetarian dishes in stock for me. The two supermarkets we’ve been to today were full and shelves were emptying fast. I was searching for some spices to make mulled wine, but couldn’t find any. They were sold out at Waitrose, the first supermarket, and arrived on time to get the last bag from Sainsbury’s, where we went next. After getting all the groceries I wanted, I disappeared at the cosmetics aisle. “You’re acting like a child in a candy shop,” my boyfriend joked when picking me up to go back to the car. How could I not?

We are staying home tonight. We have mulled wine – mission accomplished – and curry for dinner, probably some TV afterwards. I brought with me a good book – The Lonely City – so I hope to make time for reading, as well. More adventures from England in the days to come! 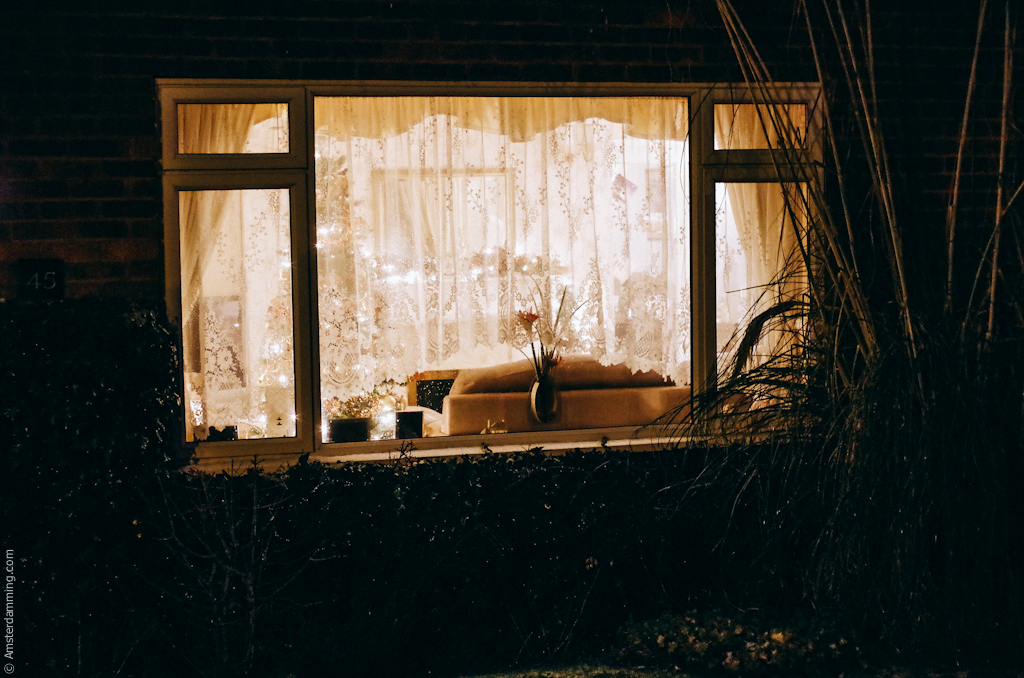 P.S. The photos in this post are from previous years, I haven’t taken any just yet.

You’re so lucky, I hope you know it! Drama is all I know from my own family. My ex-husband’s family would ignore me completely and my new family are cold as ice. 😉

Yes, it feels good to know they are nice people. 🙂 Too bad about your BF’s family though. Maybe it takes some time for them to open?