There will always be things appearing as weird to some, despite them being quite normal to others.

This, of course, goes for people`s impressions of Amsterdam as well. And I must say I find it very funny whenever I hear one of the remarks below about the city I now live in.

1. I almost got hit by a bike! How do you deal with this every day? 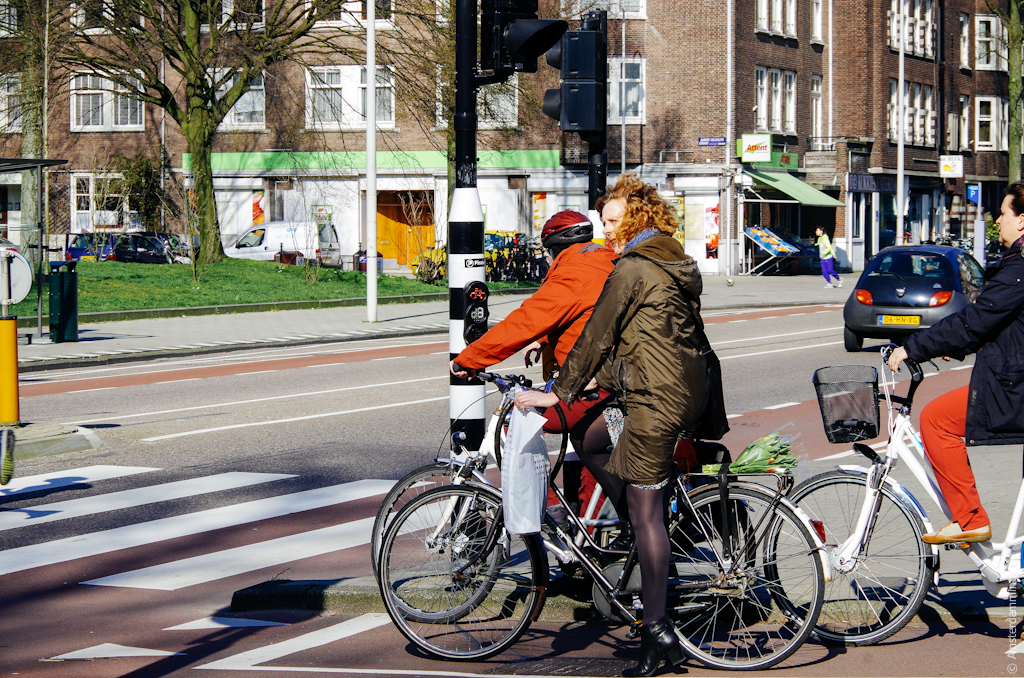 Whereas it is indeed true that bike traffic gets a bit chaotic at times, I still prefer it to car traffic. Riding a bike is less noisy and it`s healthier for both humans and environment. Besides, what would Amsterdam be without bikes? 🙂

2. These stairs are killing me! Isn`t there an elevator? 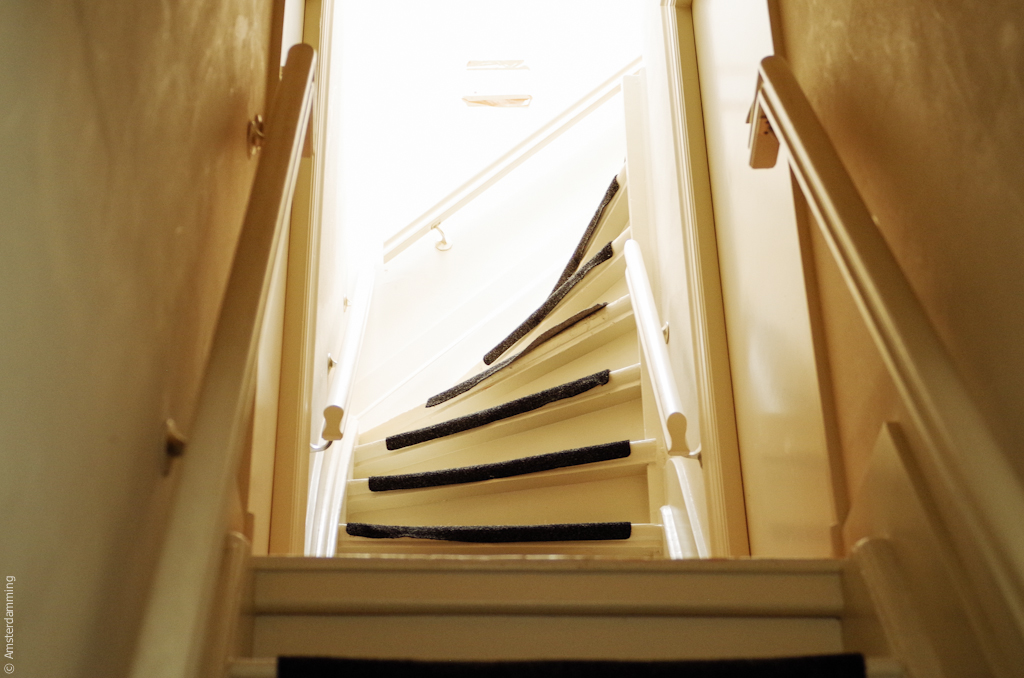 Amsterdam`s typical houses not only are they known for being extremely narrow, but also for having very steep and user un-friendly staircases. Again, it is healthier to use the stairs instead of taking the elevator (and there are only few buildings in Amsterdam to have one anyway!), but I am not a big fan of this kind of stairs either when, for example, I need to carry my groceries up to the apartment or my trolley before and after a trip.

3. Swimming at 18 degrees? Don`t these children get cold? 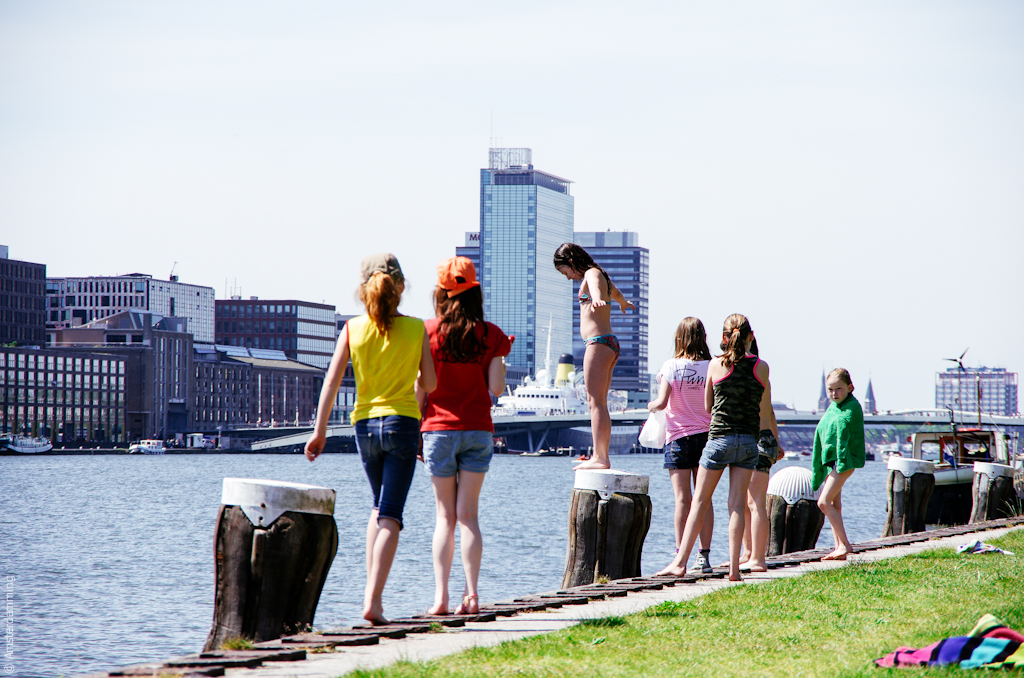 I used to ask myself the same question soon after I moved to Amsterdam and not only about children. Everyone seemed to have no problem wearing light clothes and shoes (read: slippers) when the temperature was far from being high. But, once you live in a place where warm is rare and it means, on average, 18 degrees Celsius and no rain (note that I haven`t even mentioned sunny!), then you learn to really appreciate such days and to fill them with outdoor activities. And I really admire the Dutch for taking advantage of every single sun ray! 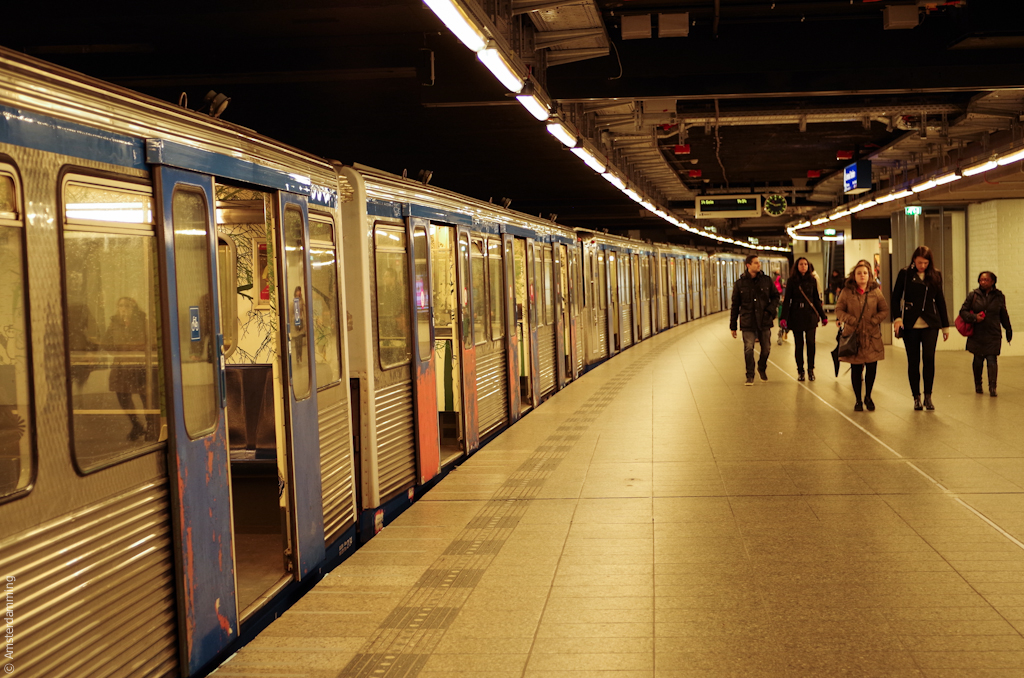 Well, I really don`t have much to say in favour of Amsterdam`s metro either. I wrote about it in a previous post and my opinion hasn`t changed much ever since. Most of the trains are old and uncomfortable and the same goes for the stations. Hopefully things will change soon and Amsterdam`s metro will be just as special as the Paris or London`s metro.

5. People here are suspiciously calm. What`s wrong with them? Same goes for their pets. 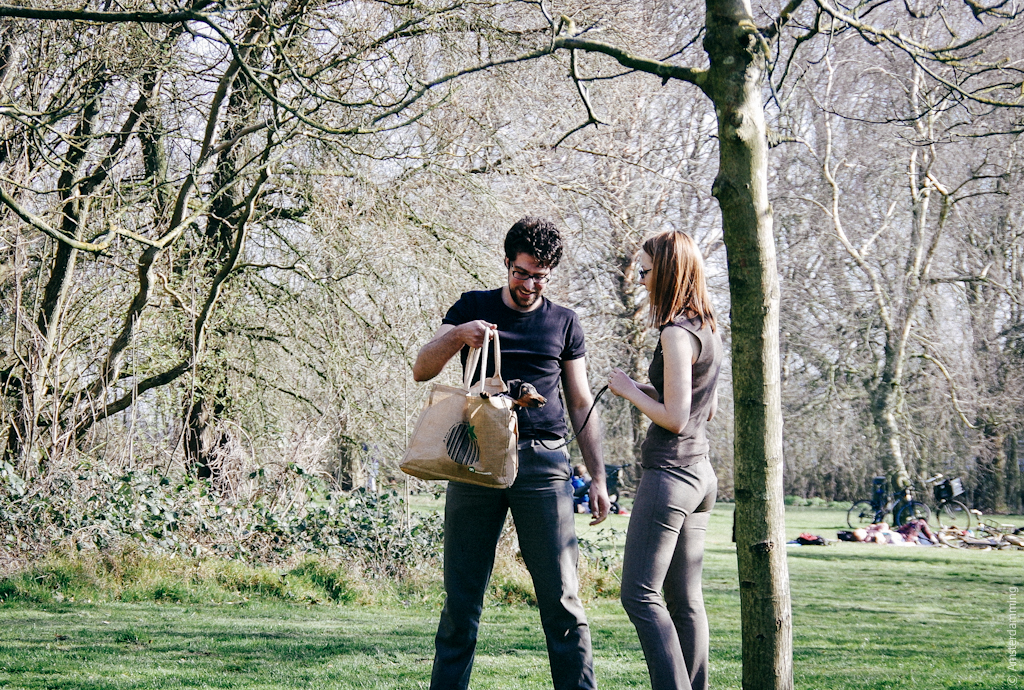 I would say Amsterdammers and their pets are just happier and I see nothing suspicious in this! 🙂 A good, healthy lifestyle can make wonders on everyone`s behaviour and it is generally known that the pets are “borrowing” a lot from their owners when it comes to this. The happiness of Amsterdammers also comes from their obvious appreciation of life and from knowing how to enjoy the simple things.

6. How can you live without a balcony? 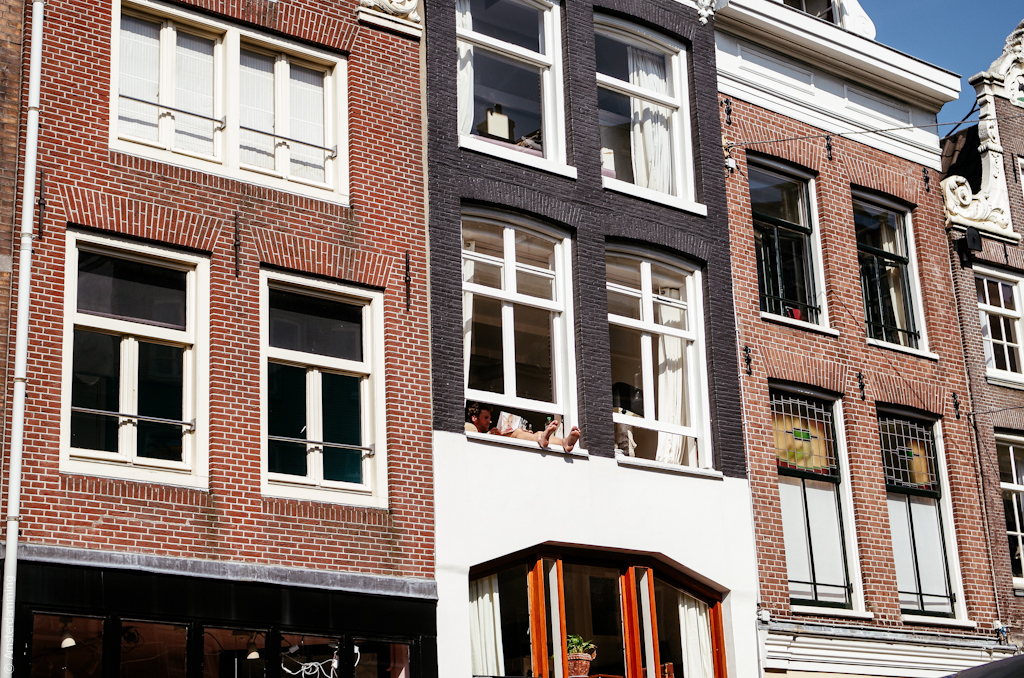 Whereas it is true that most houses in Amsterdam lack a balcony (especially the old ones), they do compensate with big windows and, in some cases, also with roof terraces or back gardens. Not to mention that, on a sunny day, Amsterdammers have absolutely no issues with simply sunbathing at the window or with taking some chairs (and other pieces of furniture) and place them on the pavement, right in front of their houses. You might think it`s the terrace of a bar / cafe, but, in reality, it`s a house temporarily moved into the street, so that its inhabitants can benefit most from the lovely weather. Balcony or no balcony, no amount of sunshine is ever wasted in Amsterdam! 🙂

7. Do you get sick more often because of the cold and humid air? 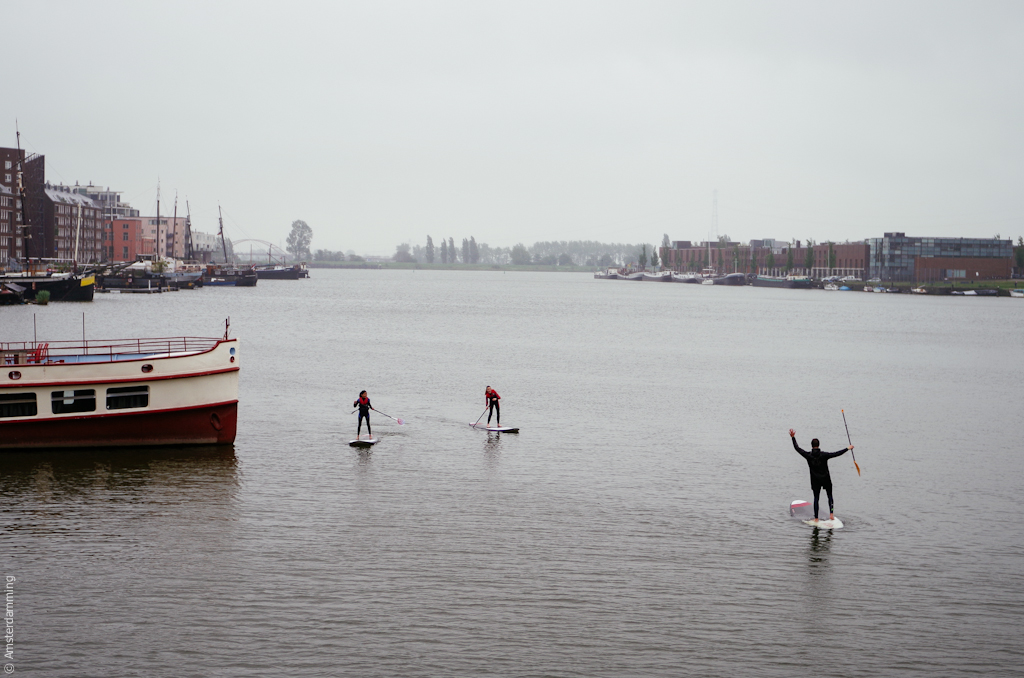 The way Greek people – to give just an example – don`t get sunstrokes just because they live in a sunny country, the same way Dutch are not affected by the cold and rain, at least not to the extent of getting sick from it. On the contrary, they are known for benefiting of a quite good health. Besides, once you`ve learned to manage the cold, I think you become more resistant and your overall health improves. But this, of course, is just my opinion! 🙂

8. Not sure I could live here. It gets a bit boring in the absence of chaos! 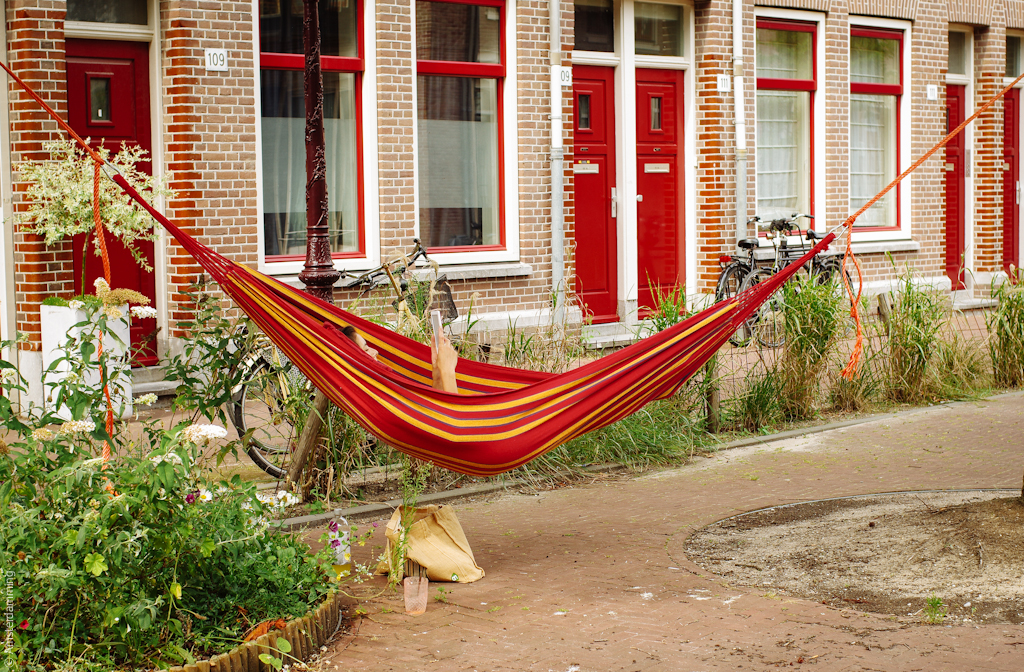 Well, I have absolutely no problem with living in a peaceful, safe and organised city, where things are working just fine and where, as a consequence, I don`t have to get stressed on a day to day basis. In the absence of stress and chaos, Amsterdammers have developed their own way of relaxing and enjoying the simple things in life, which I like to call “Dutch dolce vita”. 🙂

9. Why are people here talking so loud? 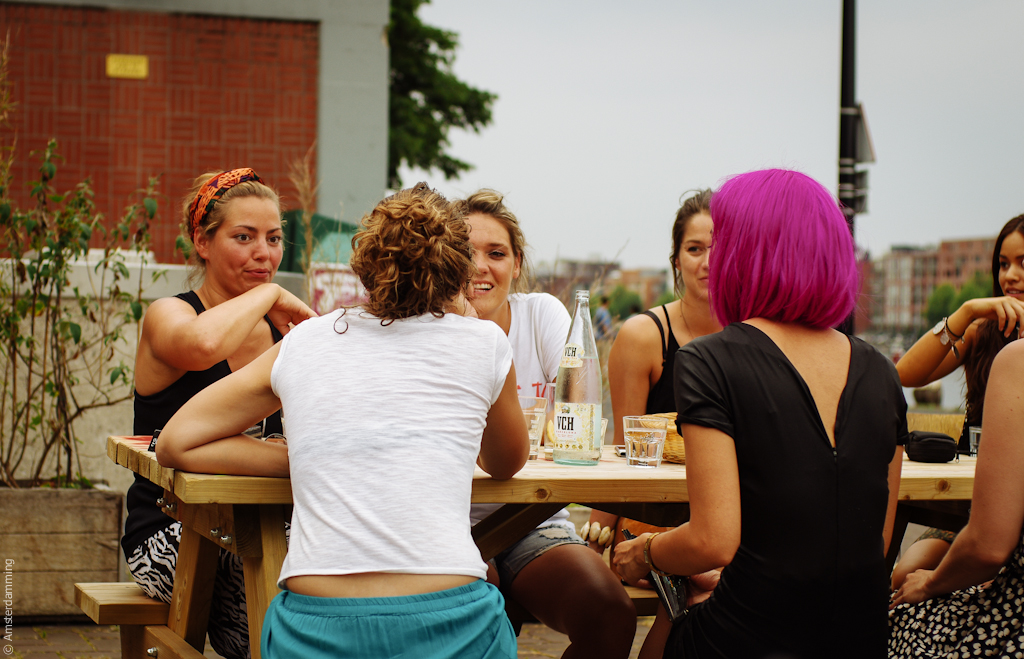 I am often annoyed by this myself and I don`t know why people here talk so loud. But I know this is a lost cause and so we just need to deal with it. 🙂

10. Don`t you get depressed from so much rain? 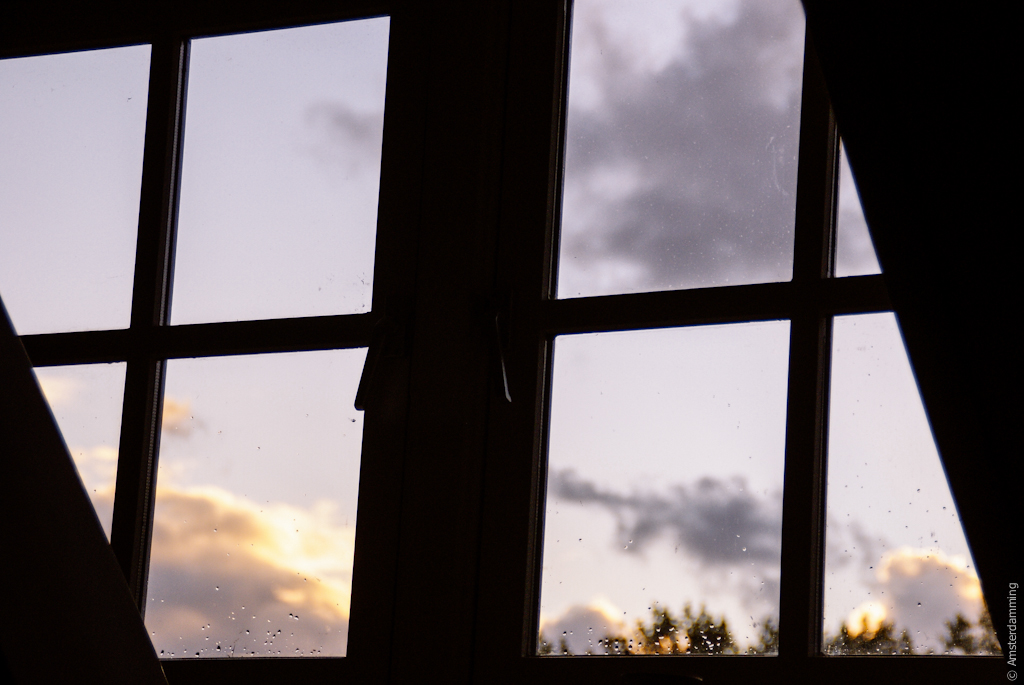 True, it does rain a lot in Amsterdam. But even rain feels different in a city where cosiness is to be found everywhere: in a nice cafe, in an intimate cinema or in the comfort of your own home (remember the large windows I was telling you about!). Even the streets are cosy in Amsterdam, rain or no rain.

11. What if you need to buy socks and it`s not Thursday evening? 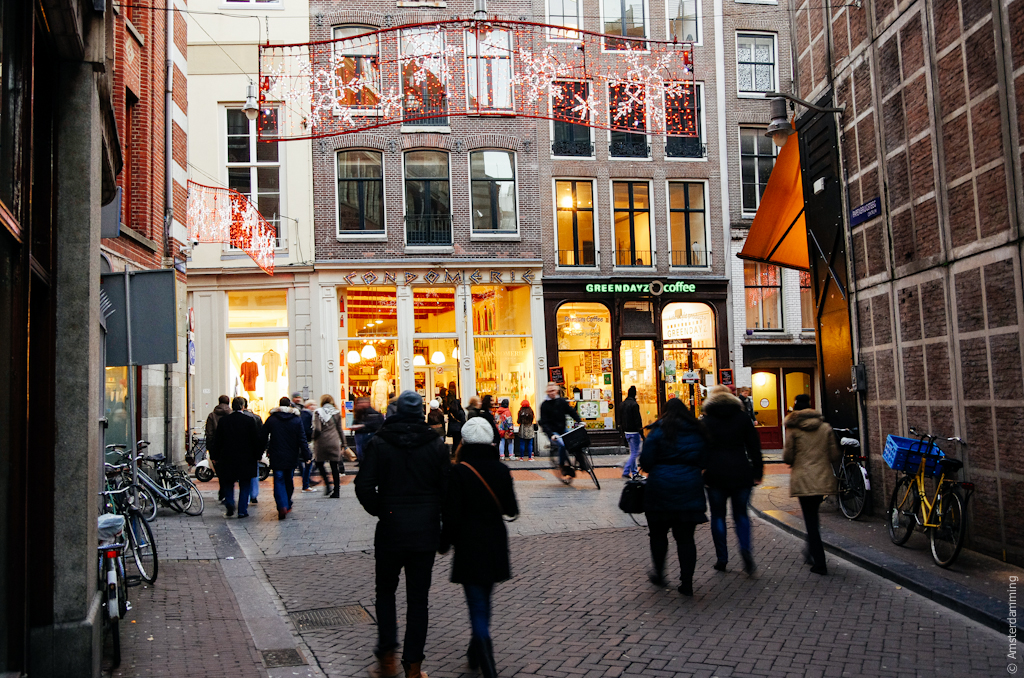 Well, if you cannot find it at Albert Heijn or at Hema – both open until late in the evening, regardless the day – then maybe you don`t really need it! 🙂 I am joking, of course. But, to be honest, I don`t actually mind that the shops are closing early in Amsterdam, except on Thursday. After all, I am not a big fan of consumerism and I like to believe that a shop closing early also means that its employees are happier.

Would you agree with these “bad” things about Amsterdam? Is there anything you`d like to add to this list?

I love you way of writing, big fan of your blog!

Thanks for the nice words! 🙂

Haha! I can relate to rain-depression and the stores closing early. I can also relate to the lack of chaos, chaos that I embrace when abroad, but don´t think I could tackle on a daily basis anymore.;-)

Exactly! A bit of chaos on holiday is ok, but not to deal with it every day! 🙂

Actually, the worst thing about Amsterdam is all those tourists. That\’s why I rather prefer Utrecht instead. No tourists would at the same time solve your first \”problem\”, as they are usually the ones walking on the bike lanes instead of on the sidewalk.
For what the metro concerns: the new M5 trains aren\’t that bad, actually. I do hope that by the time they\’ve replaced all the M1 trains, a M1 train will be placed in a museum. They weren\’t the most comfy trains indeed, but I actually like the design of these and they were the very first metros in operation in Amsterdam. Unfortunately, the very first Rotterdam metro (made in the NL by Werkspoor!) wasn\’t preserved, which is a loss of Dutch railway history.

I have to agree with the tourists part. 🙂 As for the metro, yes, I do like the new ones and I wish they were not so rare. Let`s see!

I have decided to move to Holland. Never been. However, most of your most \”terrible\” list is \”great\” to me. I lived in Northern UK and learned to love the overcast and rainy days. I was most surprised about Thursday evening shopping. I can remember when stores were closed on Sundays and only Thursday evening open late! I continue to find little peccadillo\’s that make me think I will be very content. (BTW my big concern is how to STAY. I am retired, pension, and health benefits, will do volunteer work. It will work out, I hope. 🙂 LOVE reading your blog.

Before you come here, first watch this please: https://www.youtube.com/watch?v=eE_IUPInEuc

[…] the 11 “Terrible” Things about Amsterdam that I was referring to in a previous post, it`s now time for almost twice as many reasons why […]

[…] Finally, this post 11 Terrible Things About Amsterdam made my picture of Amsterdam more vivid. Amsterdaming by Andra Stefan, Romanian in Amsterdam. […]

Overrated. Bikes are everywhere and local riders have no patience for even handicapped people trying to cross the street. Weather is rainy and umbrellas in crowds are poky and dangerous. Architecture is repetitive and boring. Litter is all over. Shopping isn’t that great unless you want weed and space cakes or beer. Overcrowded. Museums are 4 deep to see a painting. Expensive food. The history and culture of Amsterdam is arguably not very interesting. The canals are cool and pretty but takes up so much space that there’s no where to walk. Flower market is a joke, no flowers just bulbs and cheesy toys and trinkets. Squares are not beautiful or interesting. No green spaces for the most part. No feeling, no heart and soul.