I have already written a couple of times about the Entrepotdok, so you should know by now it`s one of my favourite areas in Amsterdam. Why? Because it`s central yet very quiet, has zero attractions (just a couple of cafes) and it`s entirely made of old warehouses with a very interesting history.

The story starts in the 17th century (Dutch Golden Age), when the area was the stomping grounds for the Dutch East India Company (VOC), who grew rich on sea trade. The oldest of the 84 historic warehouses on the Entrepotdok were built in 1708, while others date from 1830 and 1840. Architecturally similar, they are all lined along the canal with the same name.

300 years later, the original façades are still to be seen and on them – the names of the buildings themselves, called after Dutch and Belgian cities. Behind the façades, however, the warehouses underwent a lot of transformations and are now serving as desirable offices and apartments, affordable only for the wealthy.

But this is not exactly how things used to be on the Entrepotdok. The warehouses came out of use around 1890 and after that they stood empty for a long time. They eventually reached a very bad state, but, unlike other warehouses in Amsterdam, they were not demolished, as the Entrepotdok had been declared a national monument in the meantime. Thus, instead of demolition, a plan for reuse was developed in the early 80s by the Municipality of Amsterdam, who had become the owner of the buildings. The warehouses on the Entrepotdok were to be converted into social houses. The first homes were ready to use in 1984.

After completing this huge social housing project in a prime location in the city, it came the turn of the 12 warehouses between Entrepotdoksluis and Geschutswerf to be converted into 47 condominiums owned by the private sector. They are known by the name of Kalenderpanden (Calendar Buildings) as each of them is named after a calendar month.

The Kalenderpanden are actually the ones to have the most interesting history in the area. After being in a state of decay for several years, 6 of the buildings were literally invaded by artists in November 1996: “In the harsh winter of ’96 -’97, there is only a single stove and there are many broken windows. The property is populated by a large pigeon colony. Everywhere there is a thick layer of pigeon dung and carrion. No water, no electricity and no gas.” (source: Entrepotdok Squat)

Pigeon by the water on the the Entrepotdok

Even after taking over the property and doing some repair works, the paradise still seemed out of reach for the artists. In March 1997, the problems with the Municipality started. The Municipality refused to connect the 6 buildings to the water supply network and the inhabitants could not register themselves at the respective address, thus they were not considered legal citizens of Amsterdam.

In the Summer of 2000 the squatters refused the offer made by the Municipality, that is to leave Kalenderpanden and move to a (temporary) location in Zeeburgereiland. A survey was then made: “Do you agree to the intention of the Municipality to clear the Kalenderpanden and to transform them into luxury apartments?” (source: Entrepotdok Squat) The results were: yes 28%, no 49%, no opinion 23%. However, despite the results, an eviction order was signed on August 22nd, which meant the buildings would be cleared starting October 2000. The selling of the apartments started immediatelly after, the cheapest of them having a value of € 890,000.

The eviction took place on October 31st, 2000. “Amsterdam cried where it was once laughing” was one of the headlines in the press the next days. Here are some photos and a video from that night.

In its flourishing times, the squatted area of the Kalenderpanden was called Broedplaats (Incubator) – an inspired name if you recall the pigeon colony story mentioned at the beginning, but also a metaphor for all the creative activity that was happening between those walls. It comprised, besides the living space of some artists, a big concert hall with a bar, a smaller concert hall, a foyer/bar/café, the C.I.A daytime café with a terrace, a cinema hall, rehearsal space and podium for theater groups, Radio Patapoe studio, painters studios, metal installations space, exhibition hall, bike rental space, office/meeting/weekly speeches space, sport space.

“And this is how the Capital of Inspiration, as Amsterdam let itself called in 1997, showed a lot more value to capital rather than inspiration. Never before has Amsterdam been so boring.” (source: Entrepotdok Squat)

It is really worth reading the report made by the artist squatters with the occasion of the march against the Municipality which took place on Sunday, October 1st 2000.

Entrepotdok (Kalenderpanden included) is nowadays the largest inhabited warehouse complex of Amsterdam and it continues to be an area where you can only dream of buying a house. 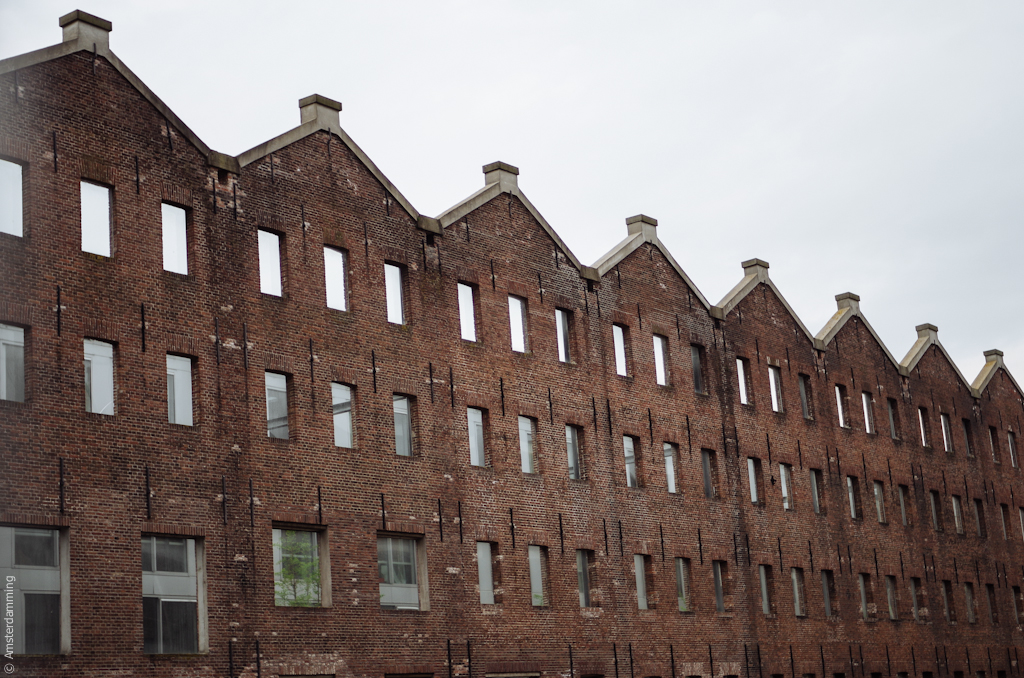 Backside of Kalenderpanden – The original façade is still preserved 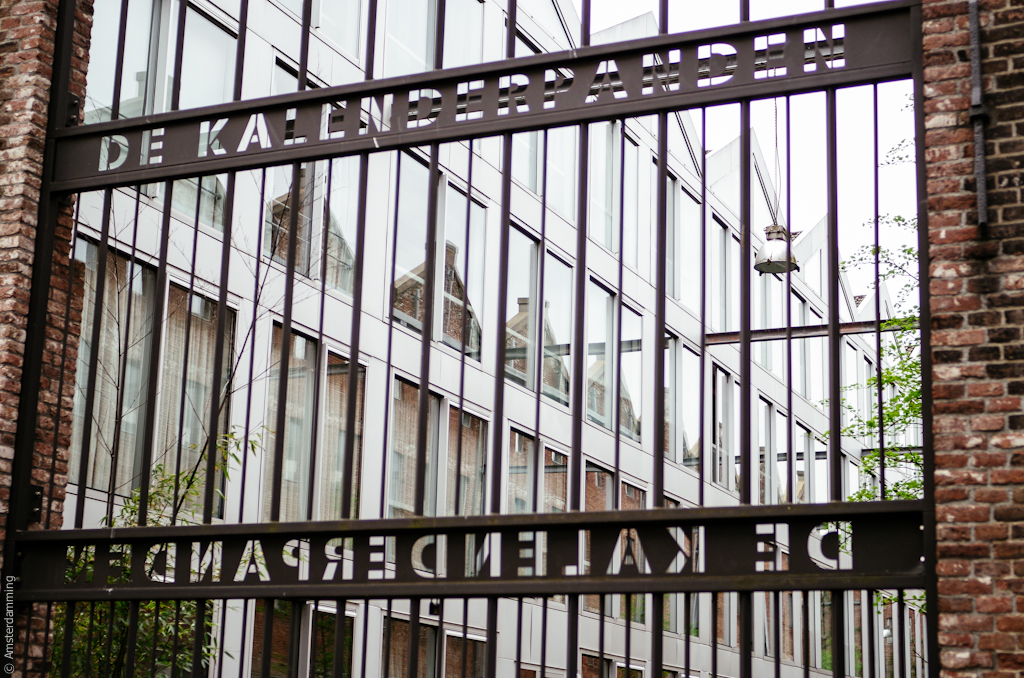 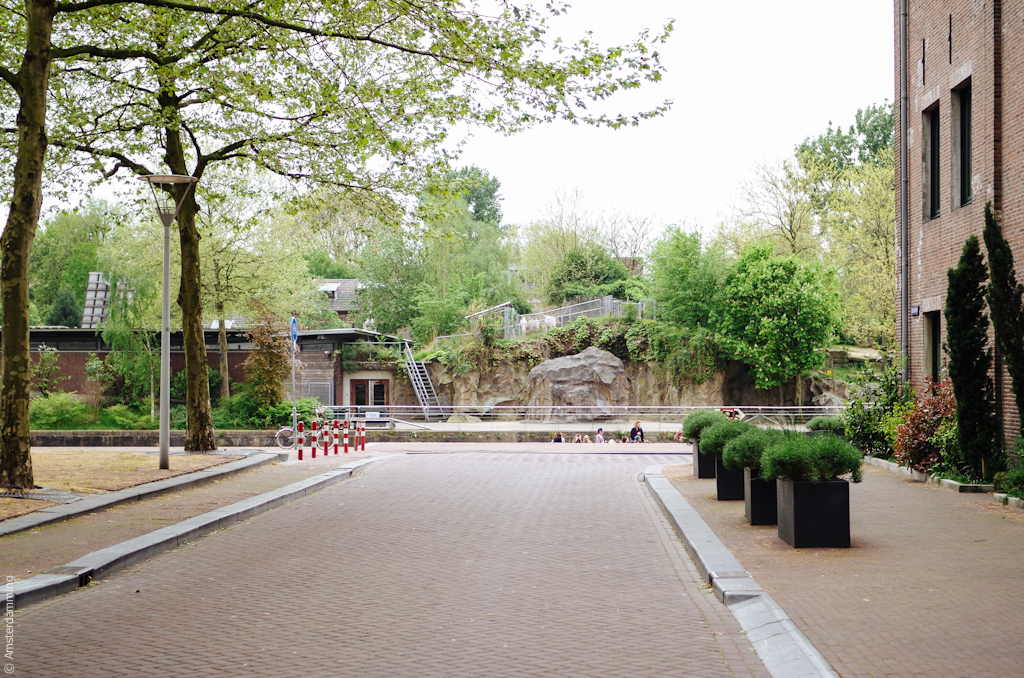 […] I like about this area, apart from its interesting history (from base for the ships sailing to the Dutch East Indies to artists squat, from squat to social […]

[…] The opening of the terrace season came one month earlier this year and it was celebrated, just like on the previous one, at the Entrepotdok. […]

Did not know the office I spend every day had so much history 🙂 See http://www.perfecthousing.com/about/amsterdam-rental-agency
I shared your post on our Facebook! http://www.facebook.com/perfecthousing

Happy to hear this! 🙂

10 Most Overrated Things to Do in Amsterdam… And What to Do Instead! | Amsterdamming Reply

[…] a few steps from Kadijksplein. It is peaceful, residential (just two cafes in the area!), has an interesting history and it is simply […]

[…] had a nice breakfast at home, took the bus and went to see the Entrepotdok area. We were lucky enough to see the beautiful bridge at Kadijkplein raise to let a boat pass, then […]