There are places in Sicily where you feel like on a movie scene. Cinematic is, I think, the easiest way to describe the Baroque towns in the South-East of the island: Noto, Ragusa, Modica. There is grandeur, at the same time, there is sadness. There is beauty, but there is also decay. For convenience, most residents now live downtown, rather than stay uphill, in the old part.

These towns are like nothing I have ever seen before. All those sculptures adorning every single wall, balcony or window, in the shapes of the known and the imaginary, they make you gaze and wonder: did their creators have fun while doing them? I like to believe they did.

My intention was to make one single post about the three towns, but that must have been a terrible underestimation. I will have to keep Modica for another time.

Without further ado, these are my impressions on Noto and Ragusa, and, since I took some travel notes while in Sicily, I will share them with you, too. 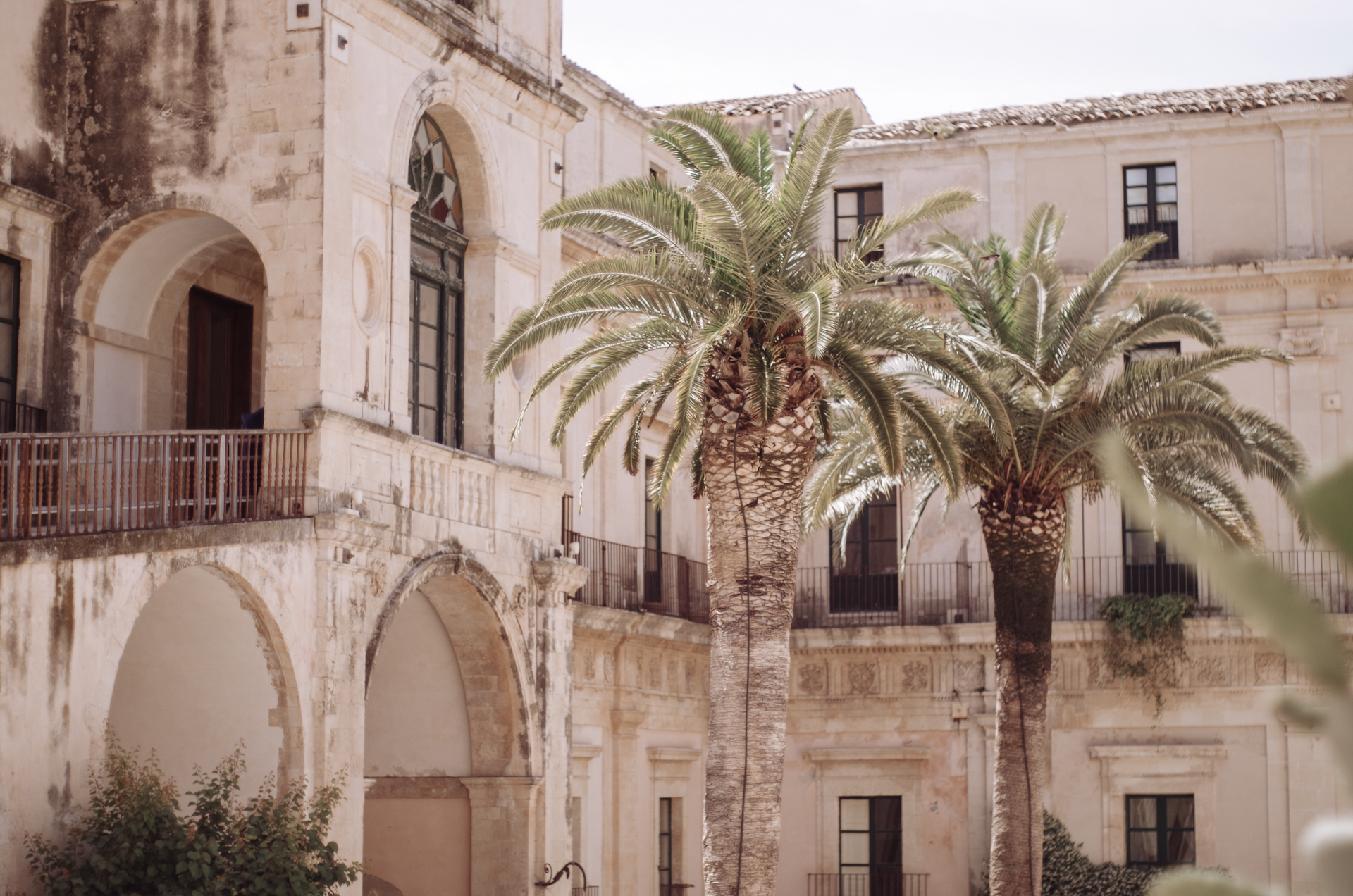 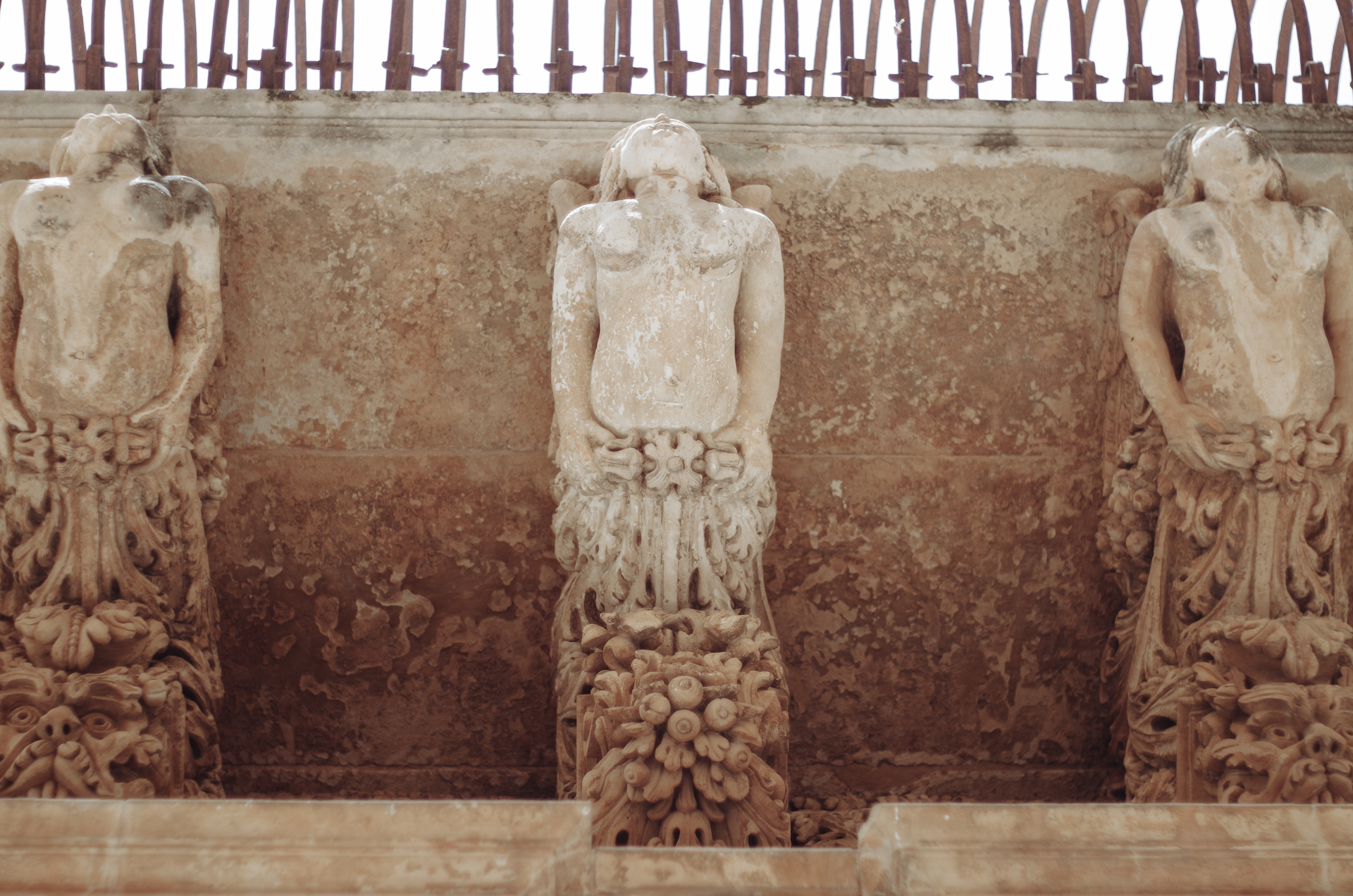 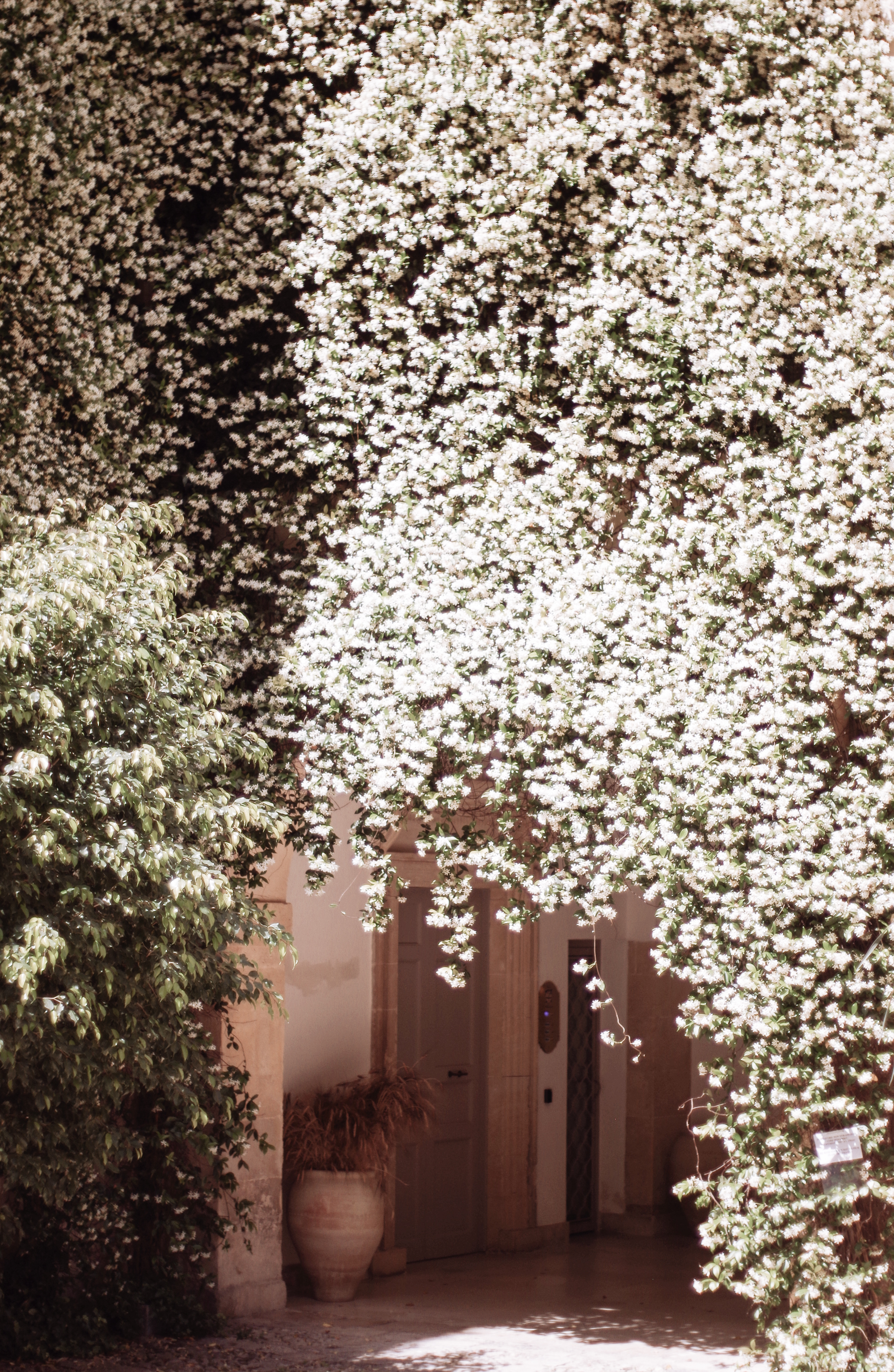 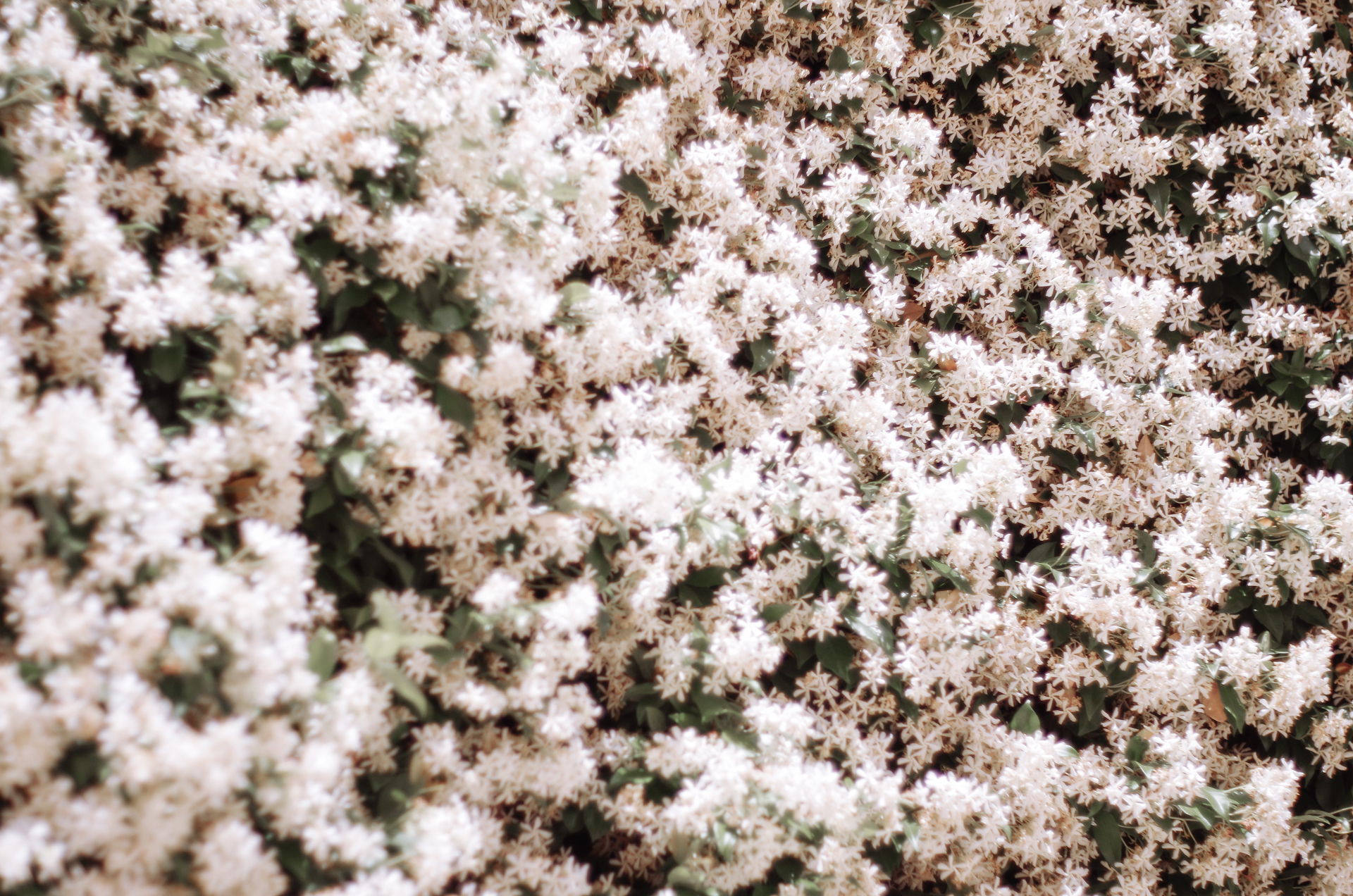 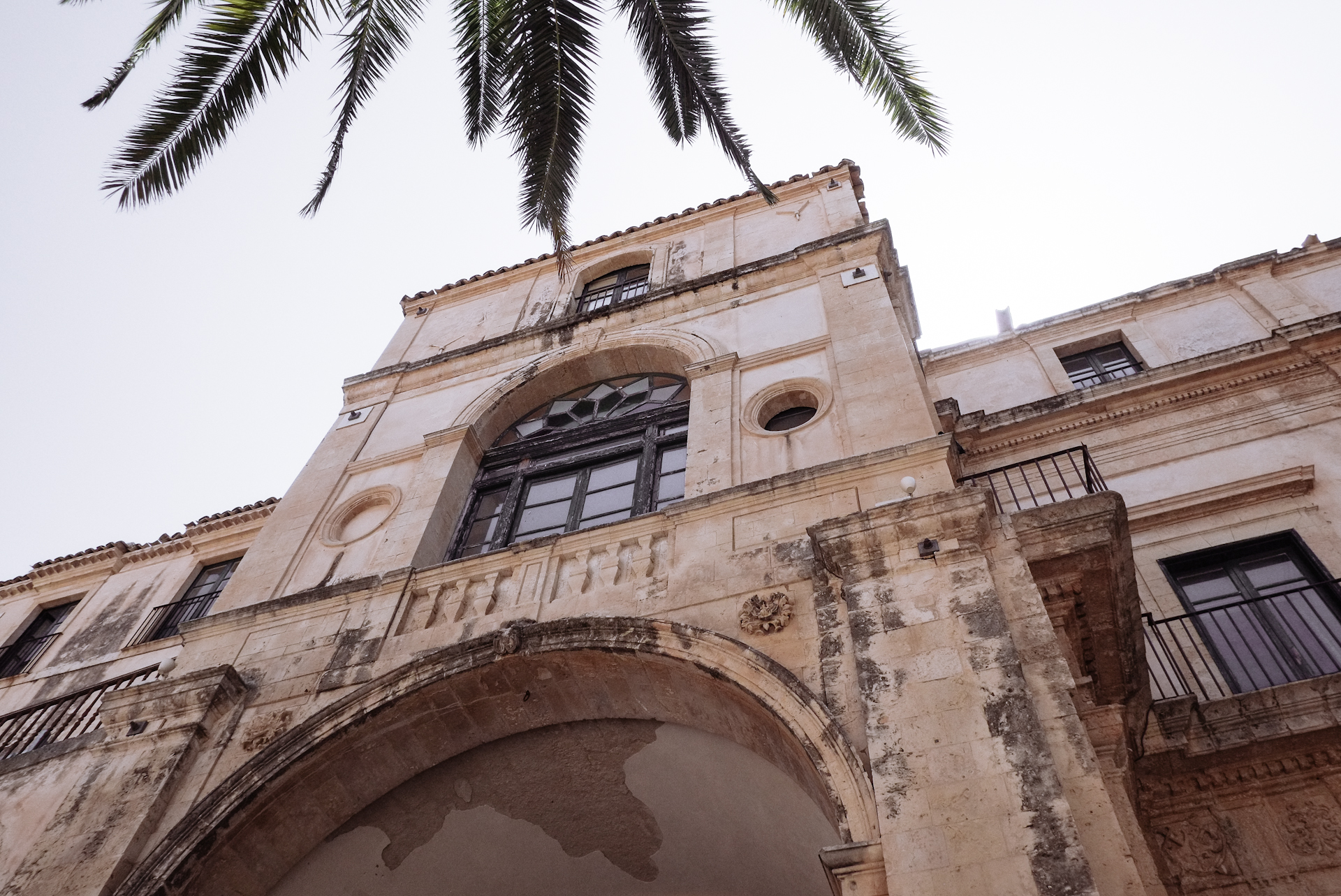 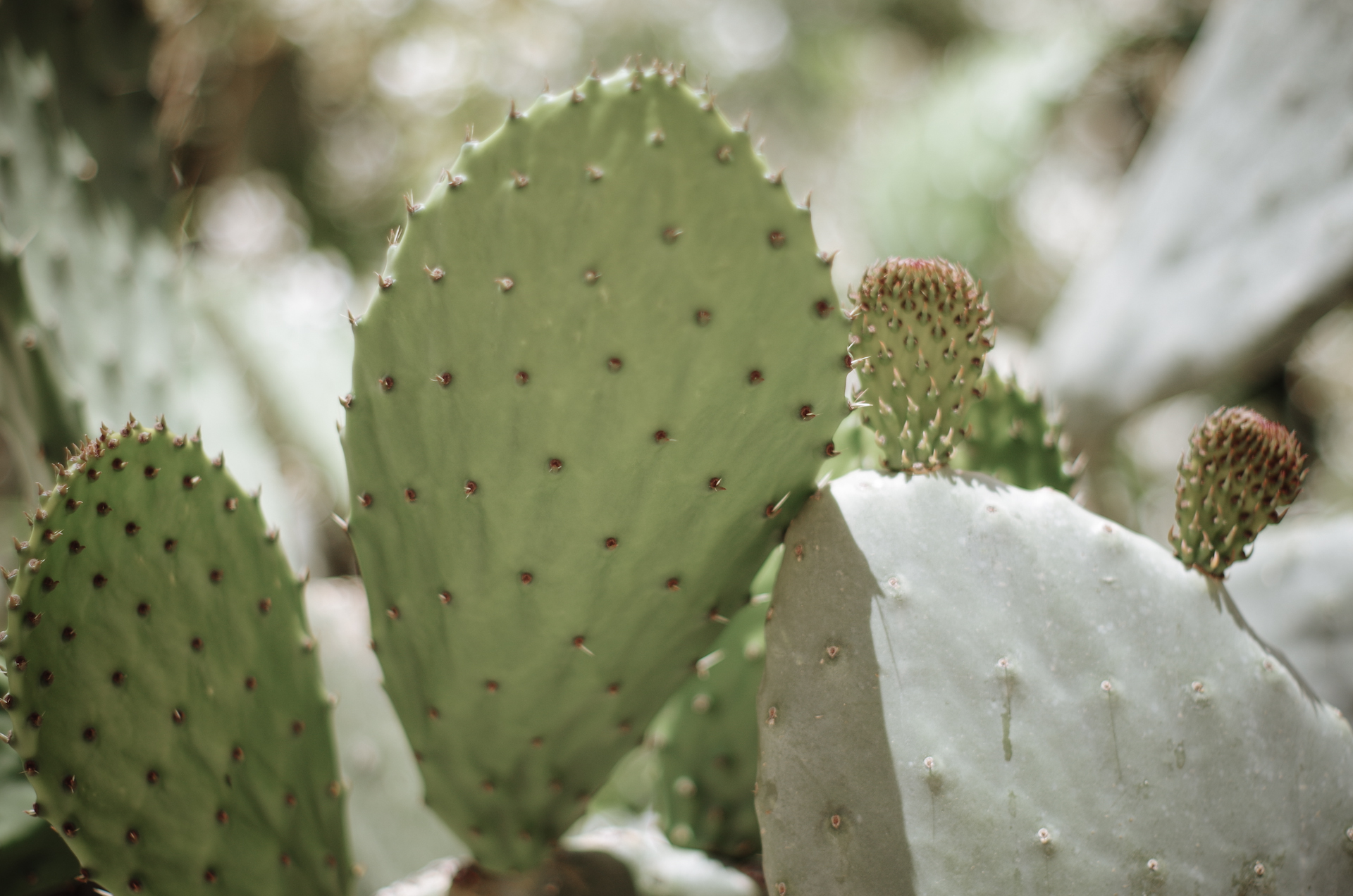 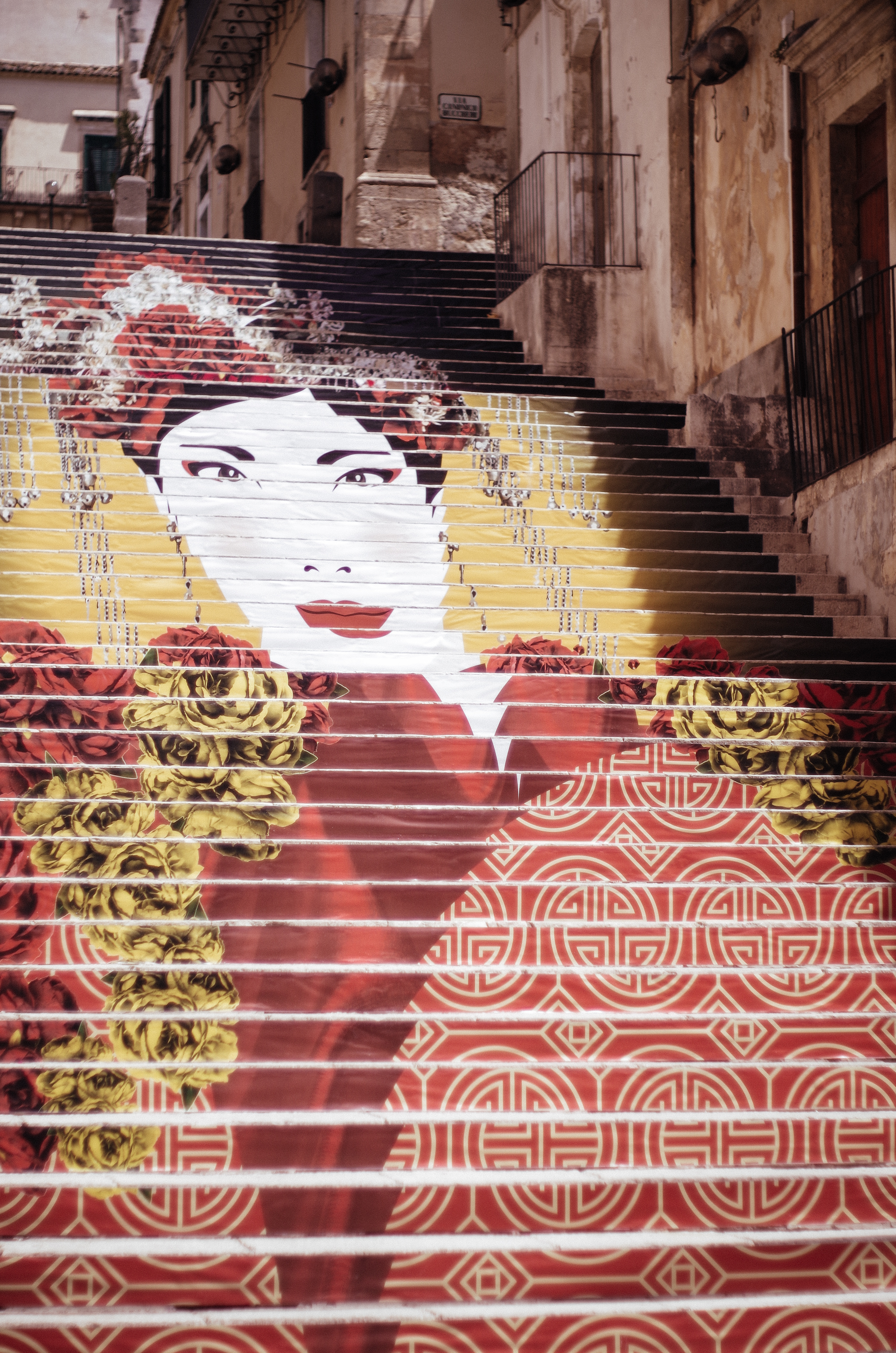 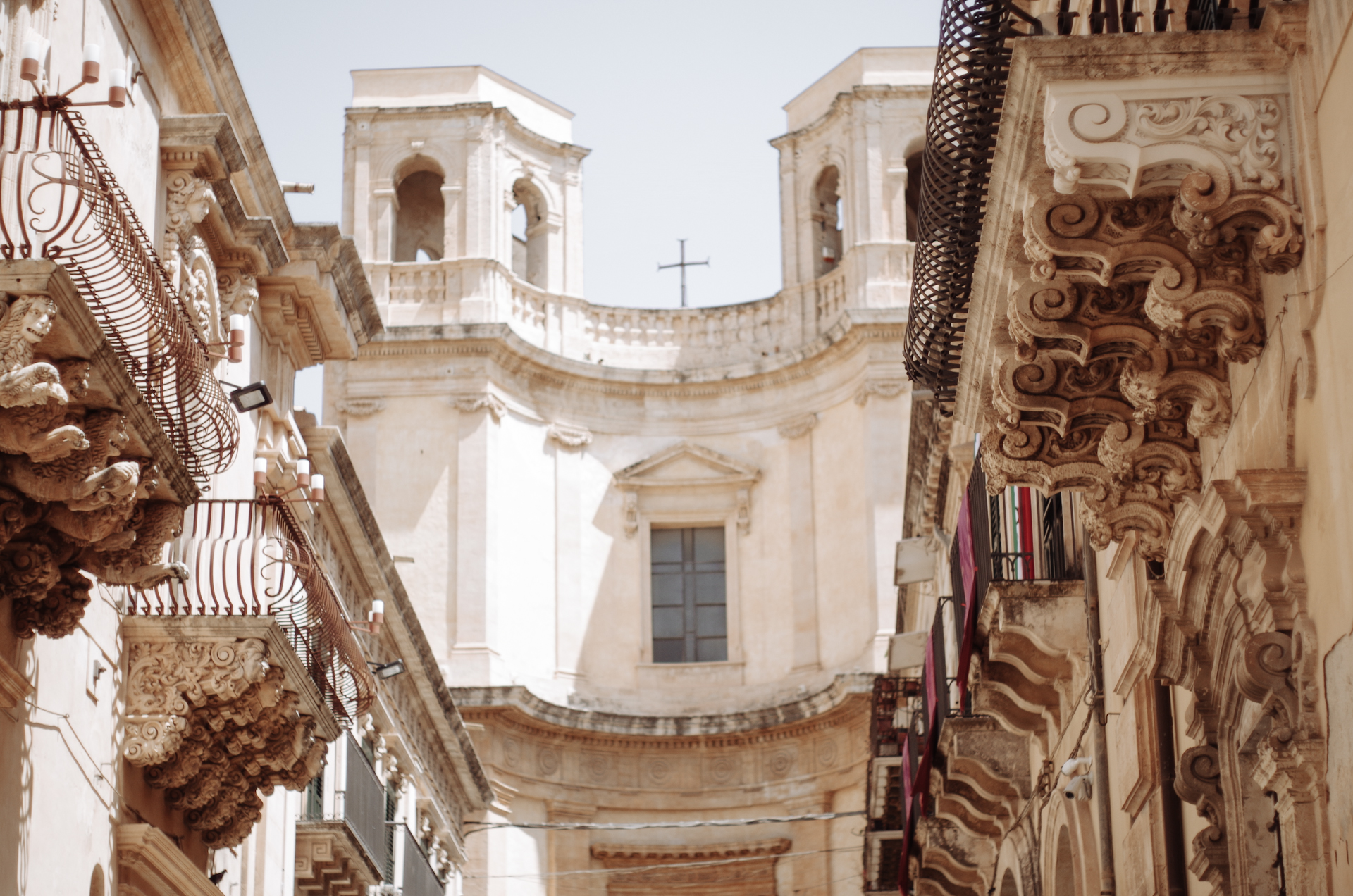 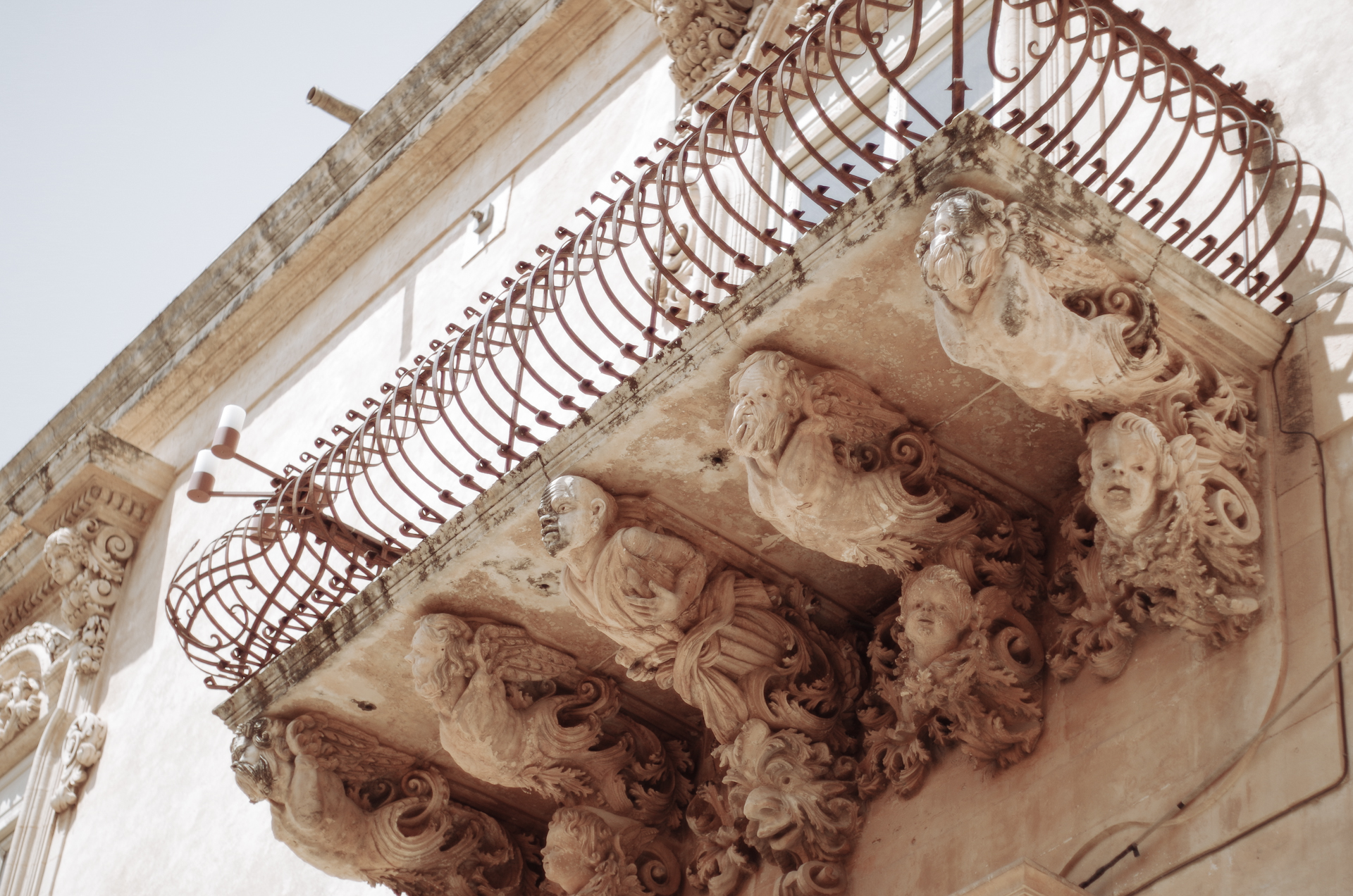 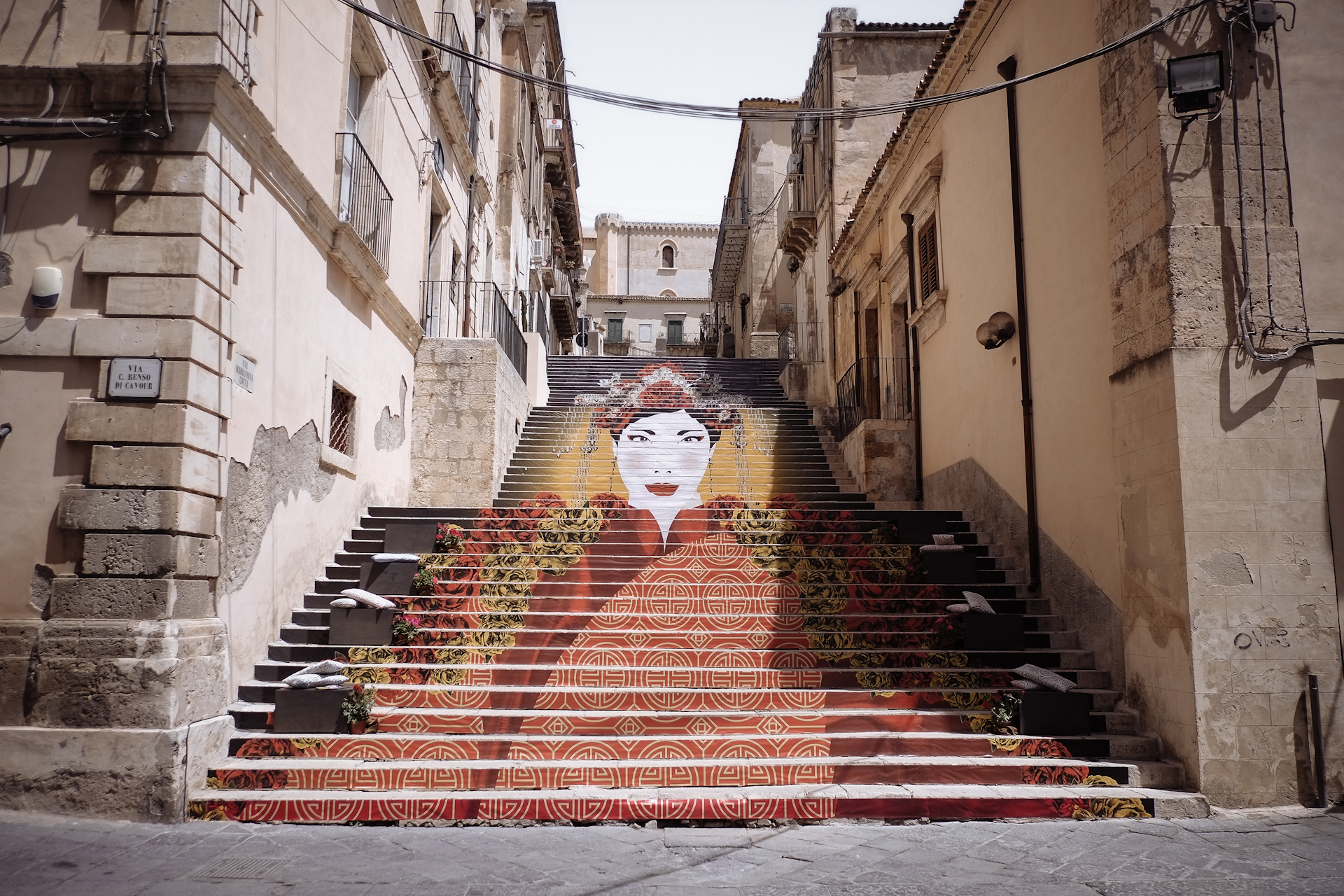 Our visit to Noto was shorter than expected. We decided to pass by and see the world heritage Baroque town on our way to Modica (our second home base after Syracuse/Ortigia.) It was the Thursday before the Flower Festival weekend, the so-called Infiorata di Noto, which meant couch after couch, dropping-off tourists after tourists.

We sought refuge and found it in the courtyard of a former palace. Not only could we have some peace now, I was also able to play my favourite travel game, that of letting my imagination wander and try to recreate, based on what my senses were experimenting that very moment, the reality of a time long gone. What was it like to live in that palace? To open the windows and fill your lungs with the intoxicating smell of jasmine? To rush down the stairs, out into the city streets?

Noto had to be entirely destroyed by the 1693 earthquake to be rebuilt from scratch in the beautiful style it is revered for nowadays. The hired architects made the new Noto a masterpiece of Sicilian Baroque, a true “Stone Garden,” as it was called, which turns the colour of honey under the sunlight. 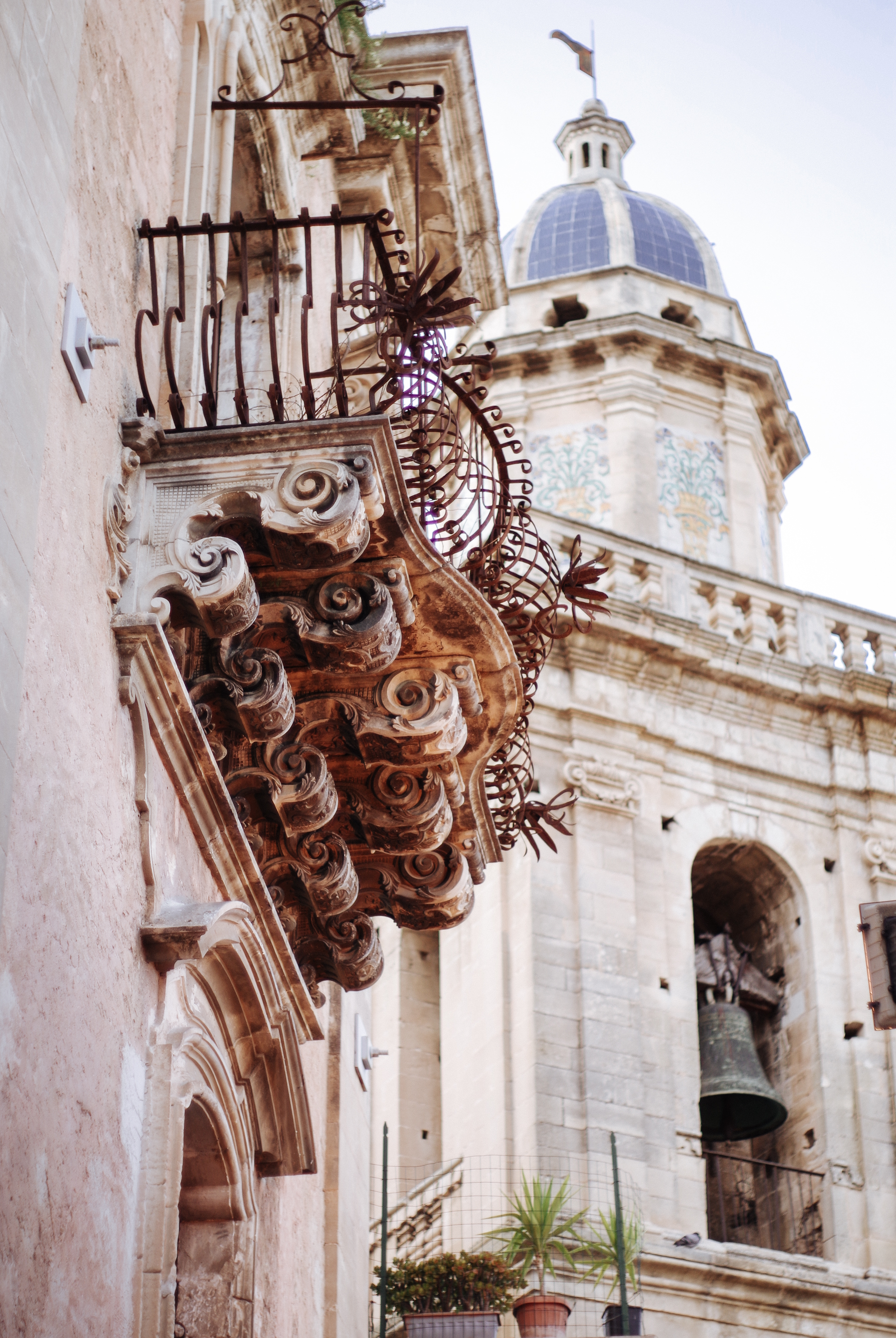 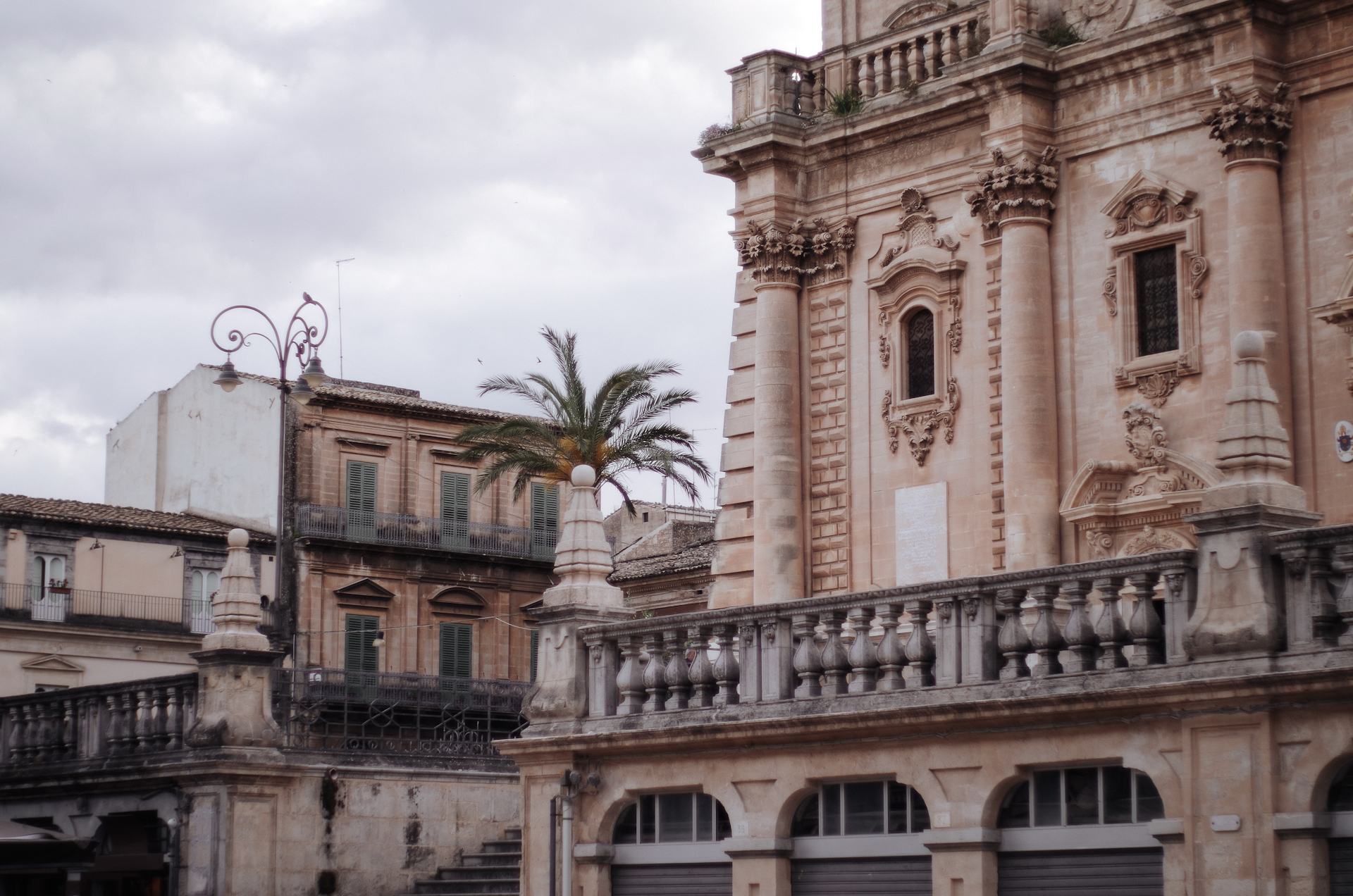 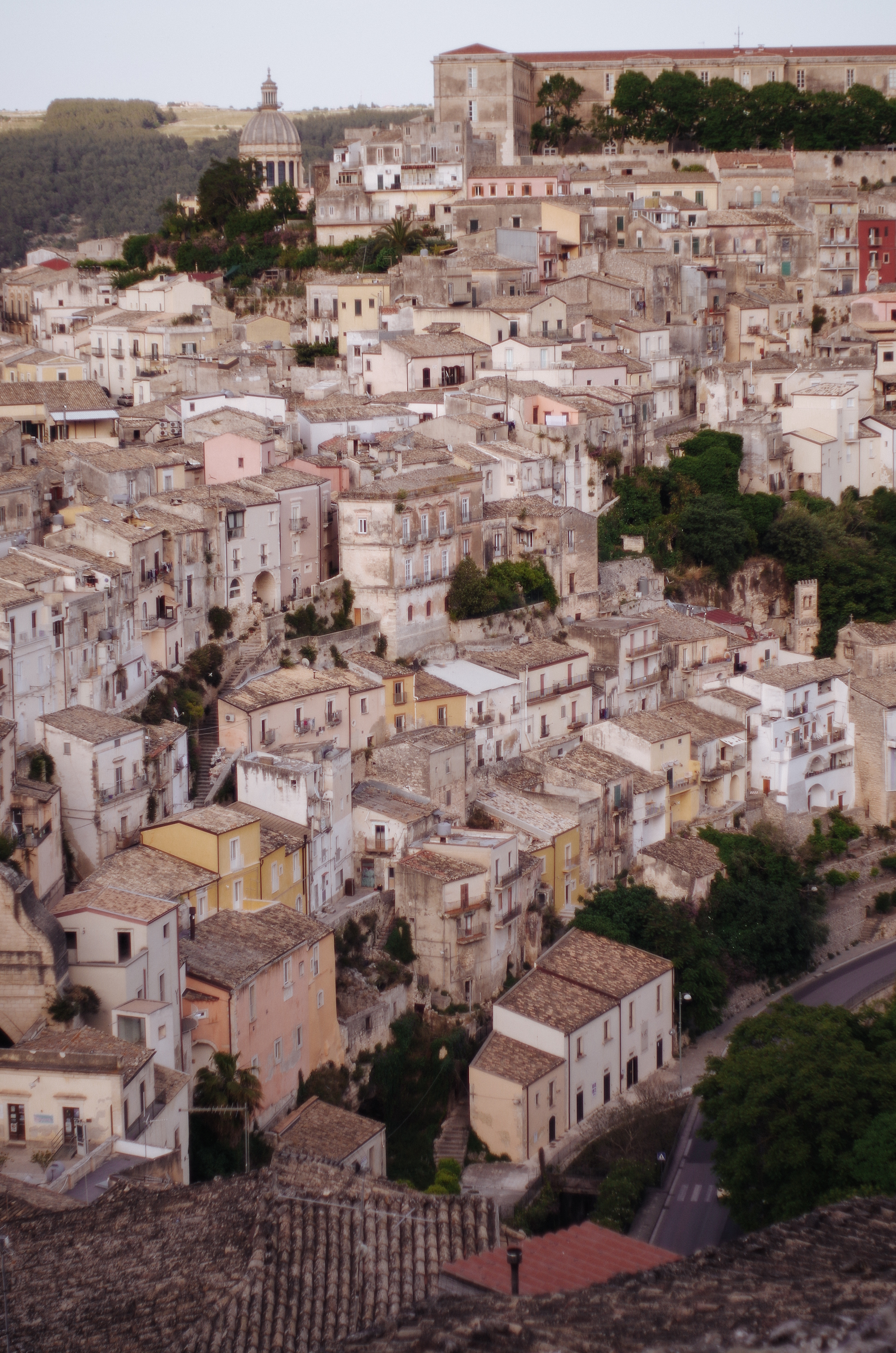 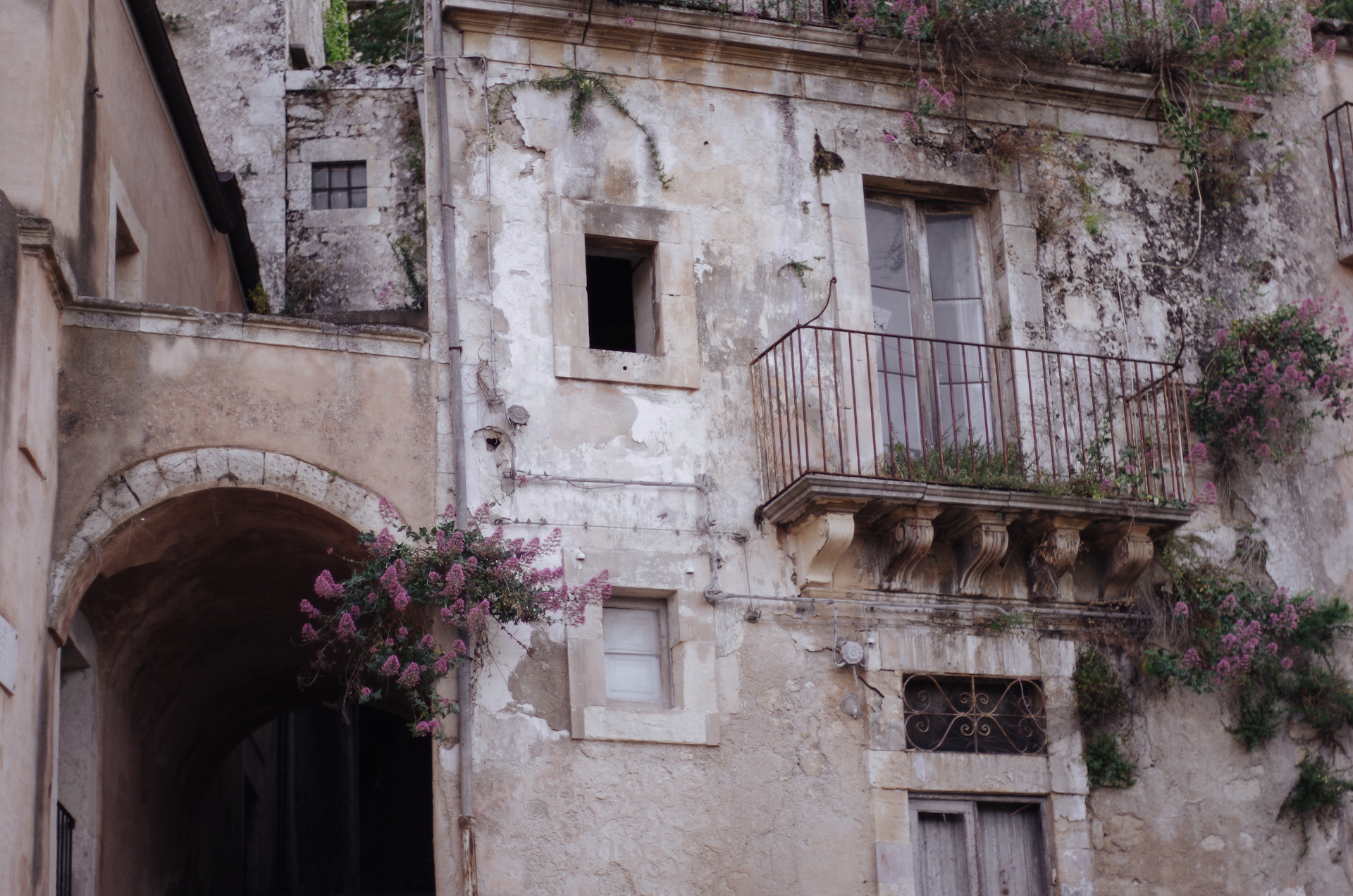 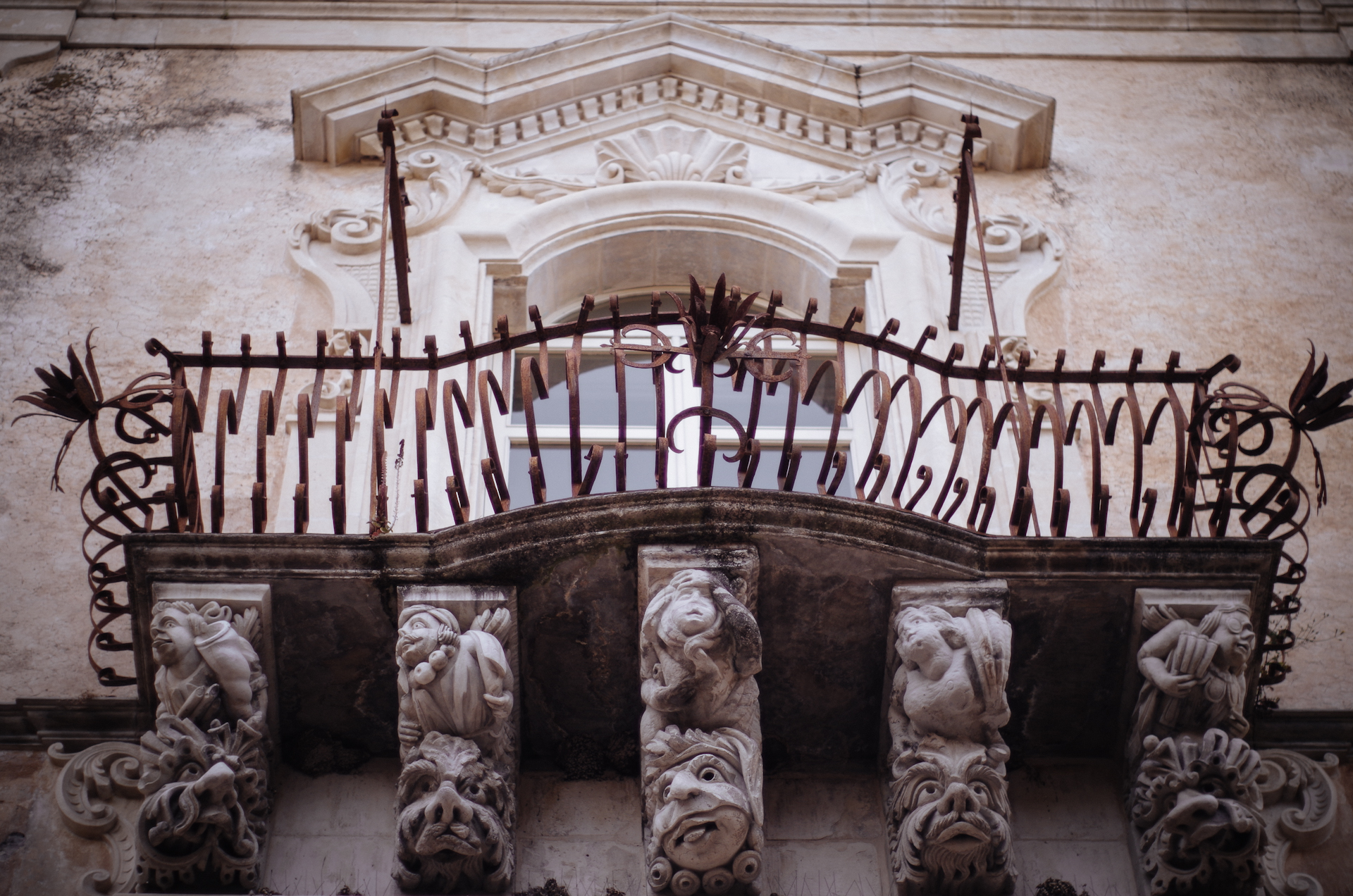 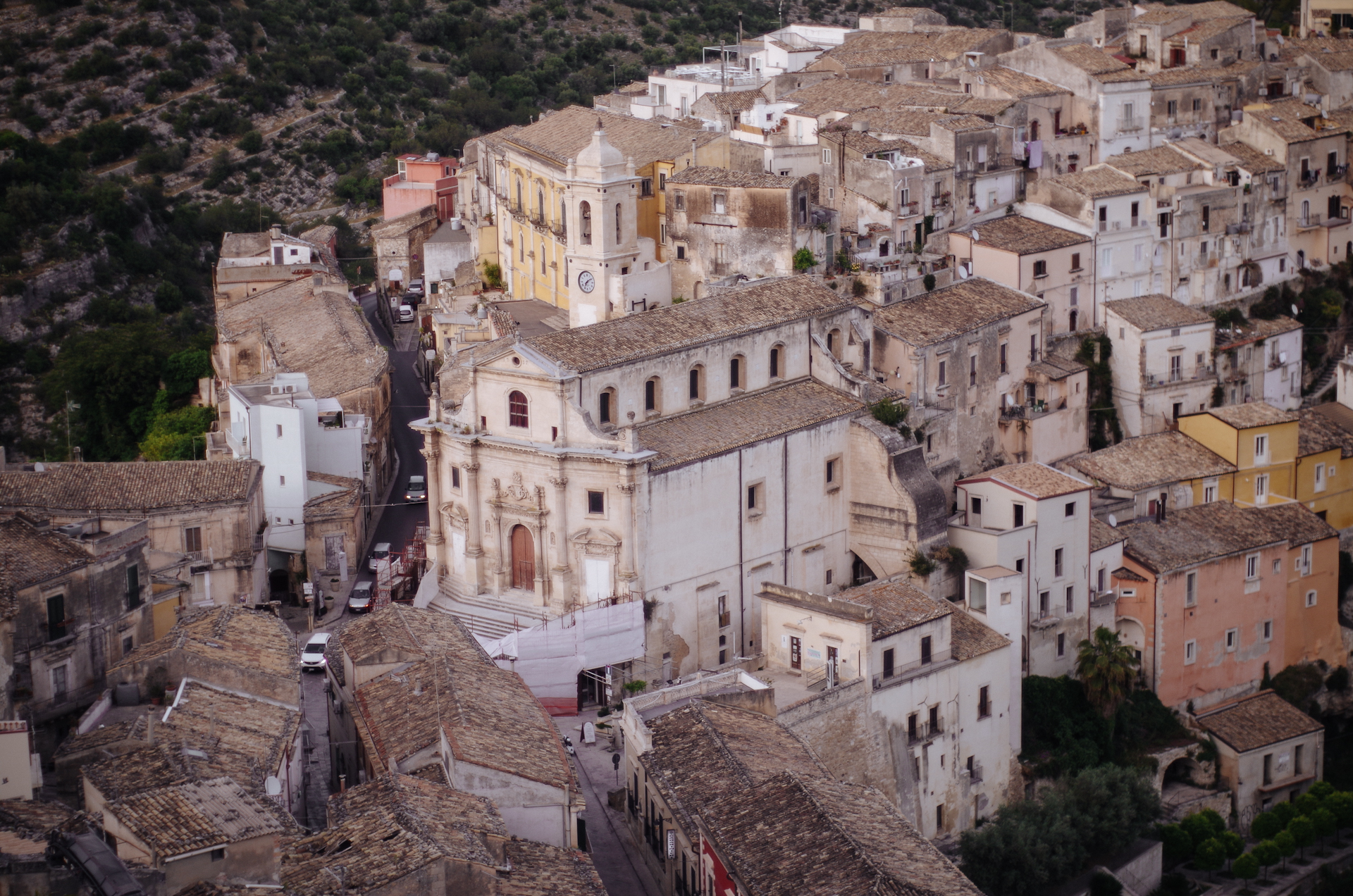 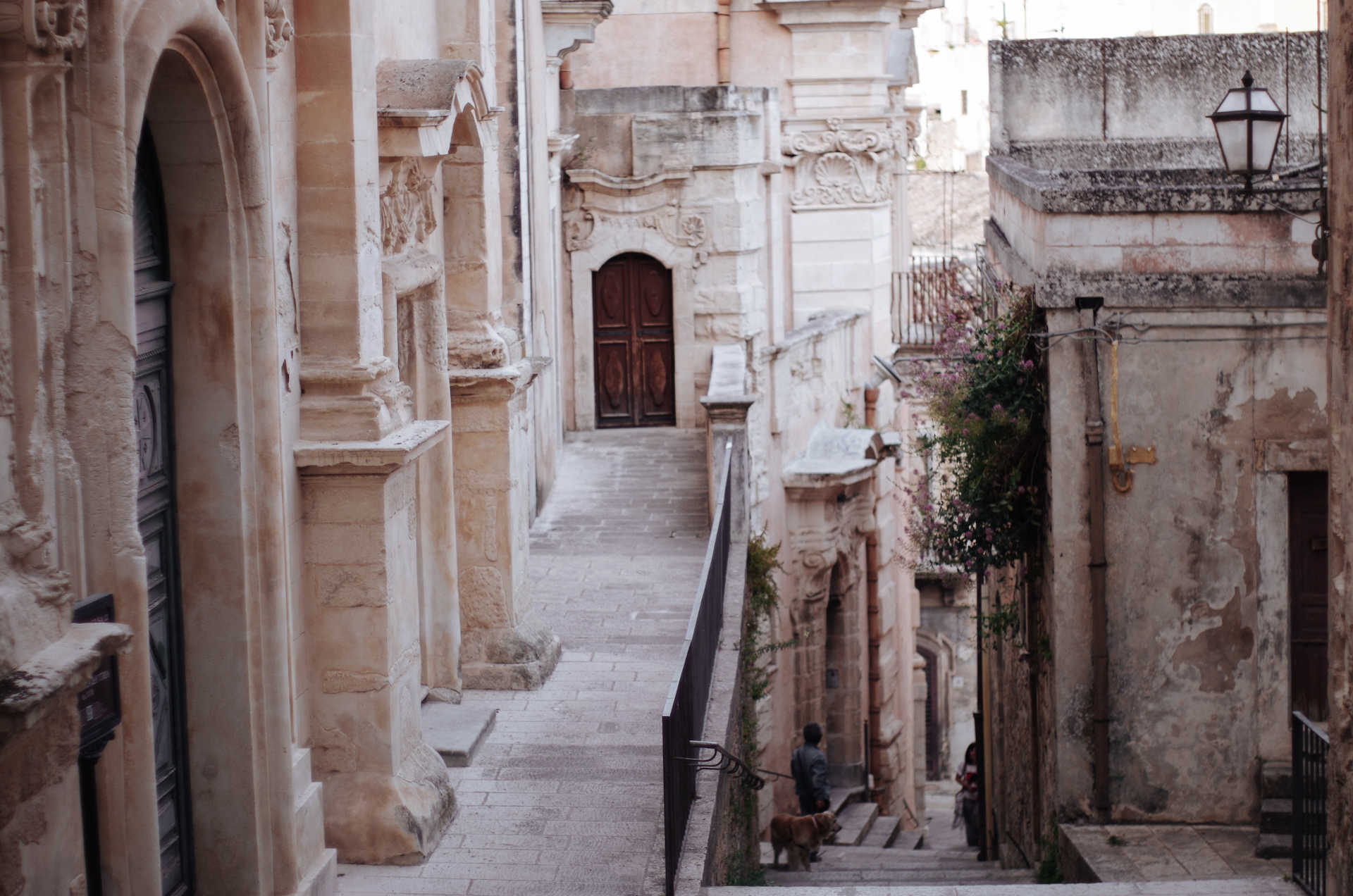 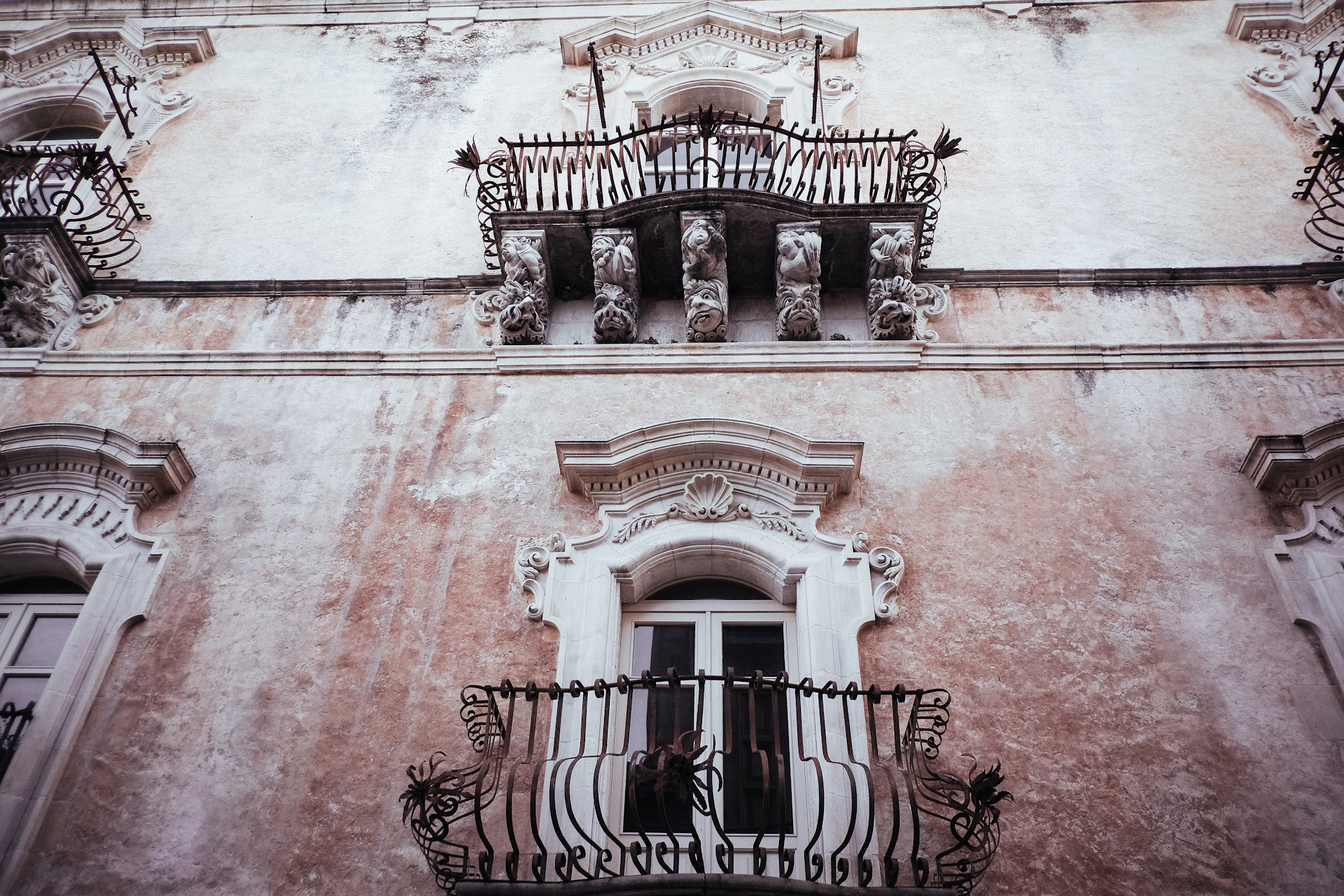 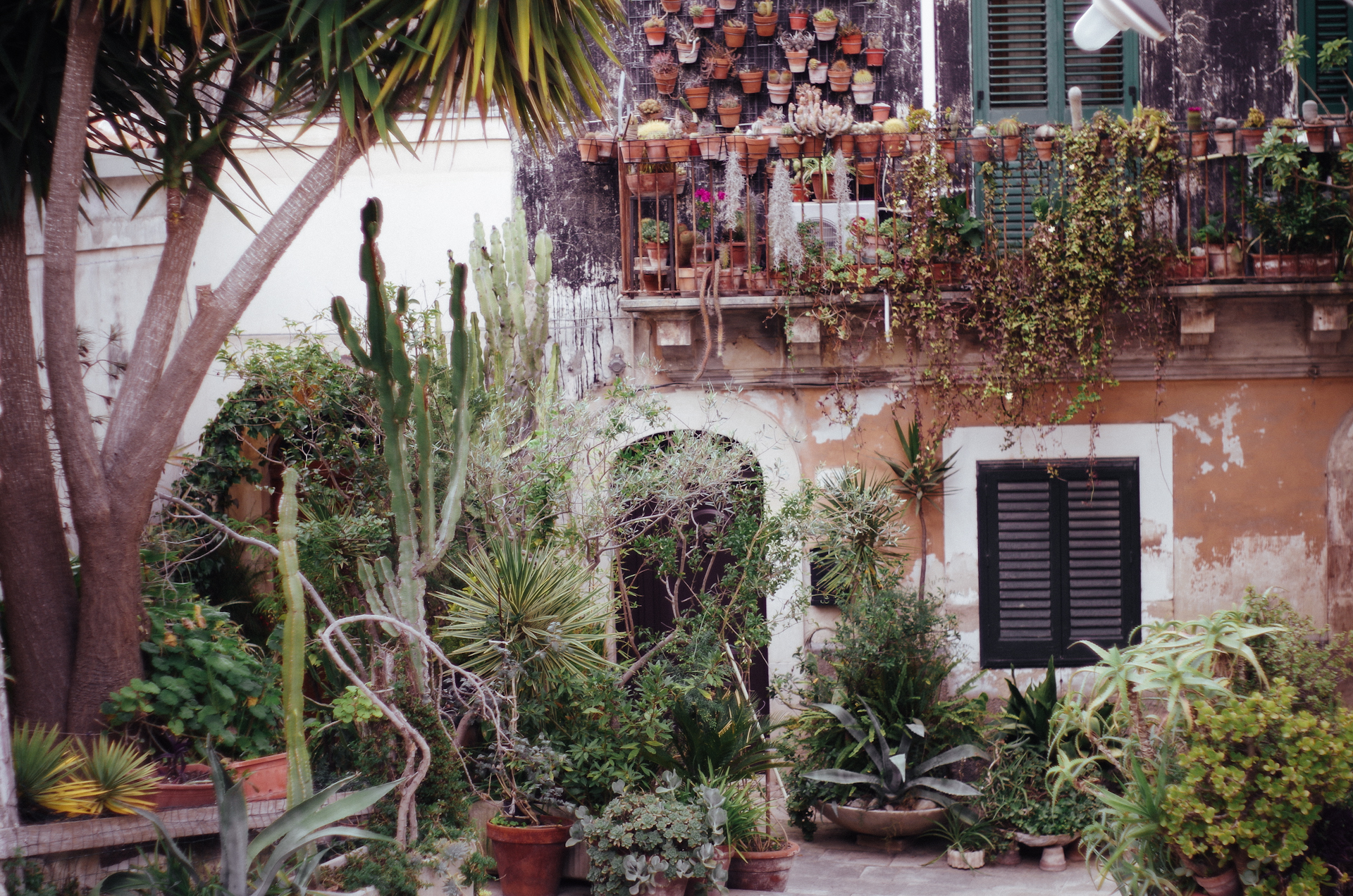 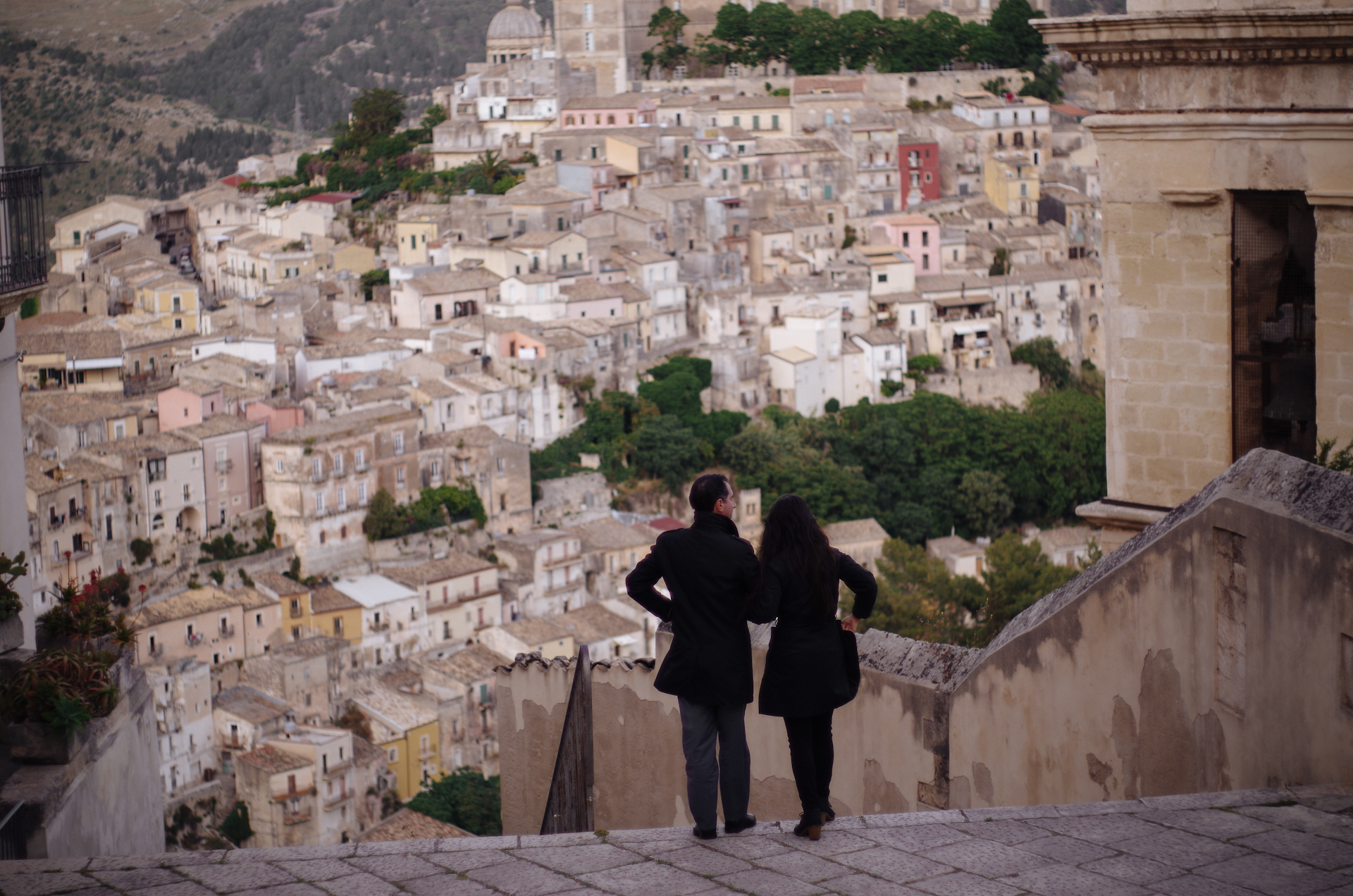 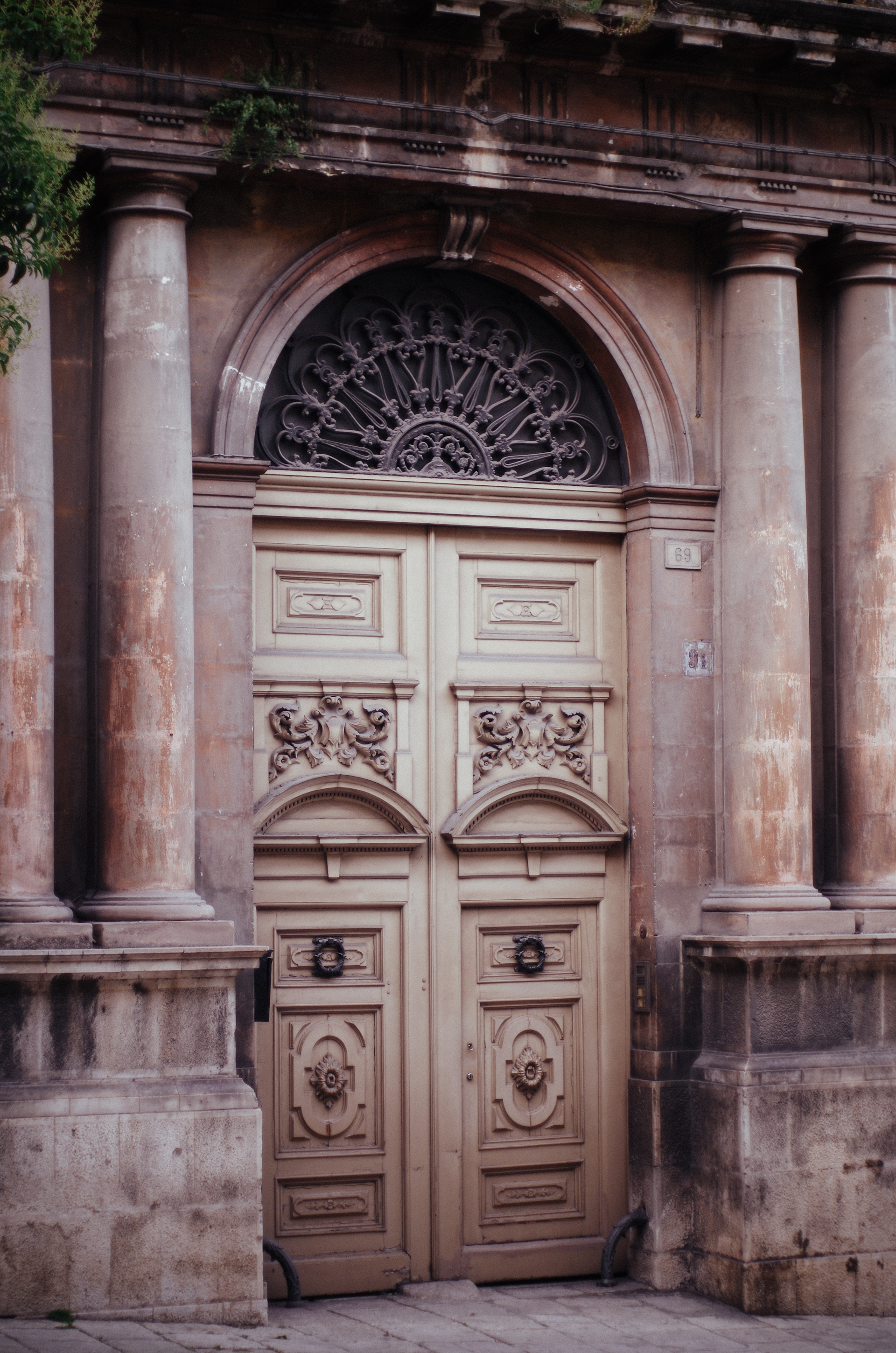 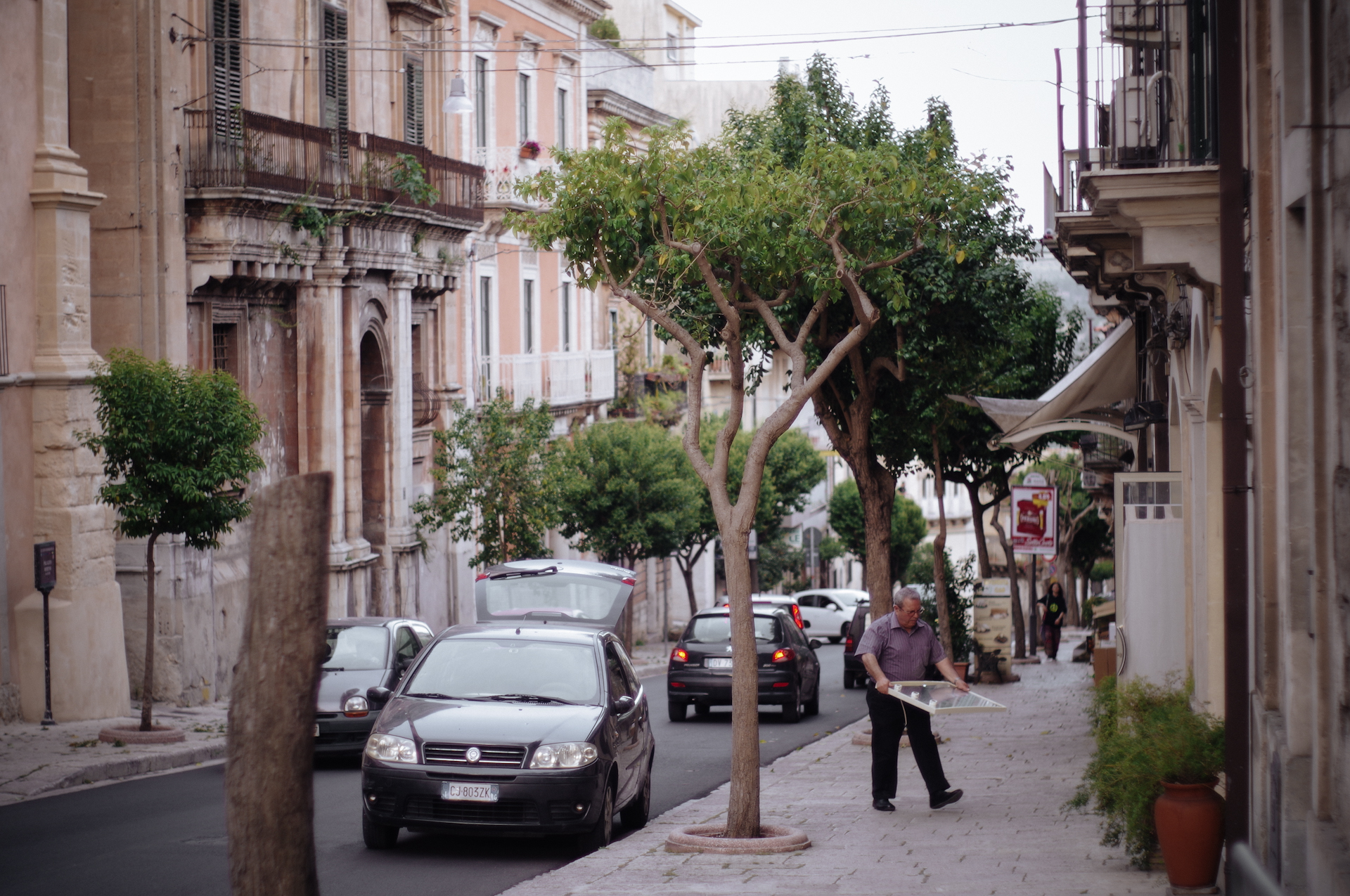 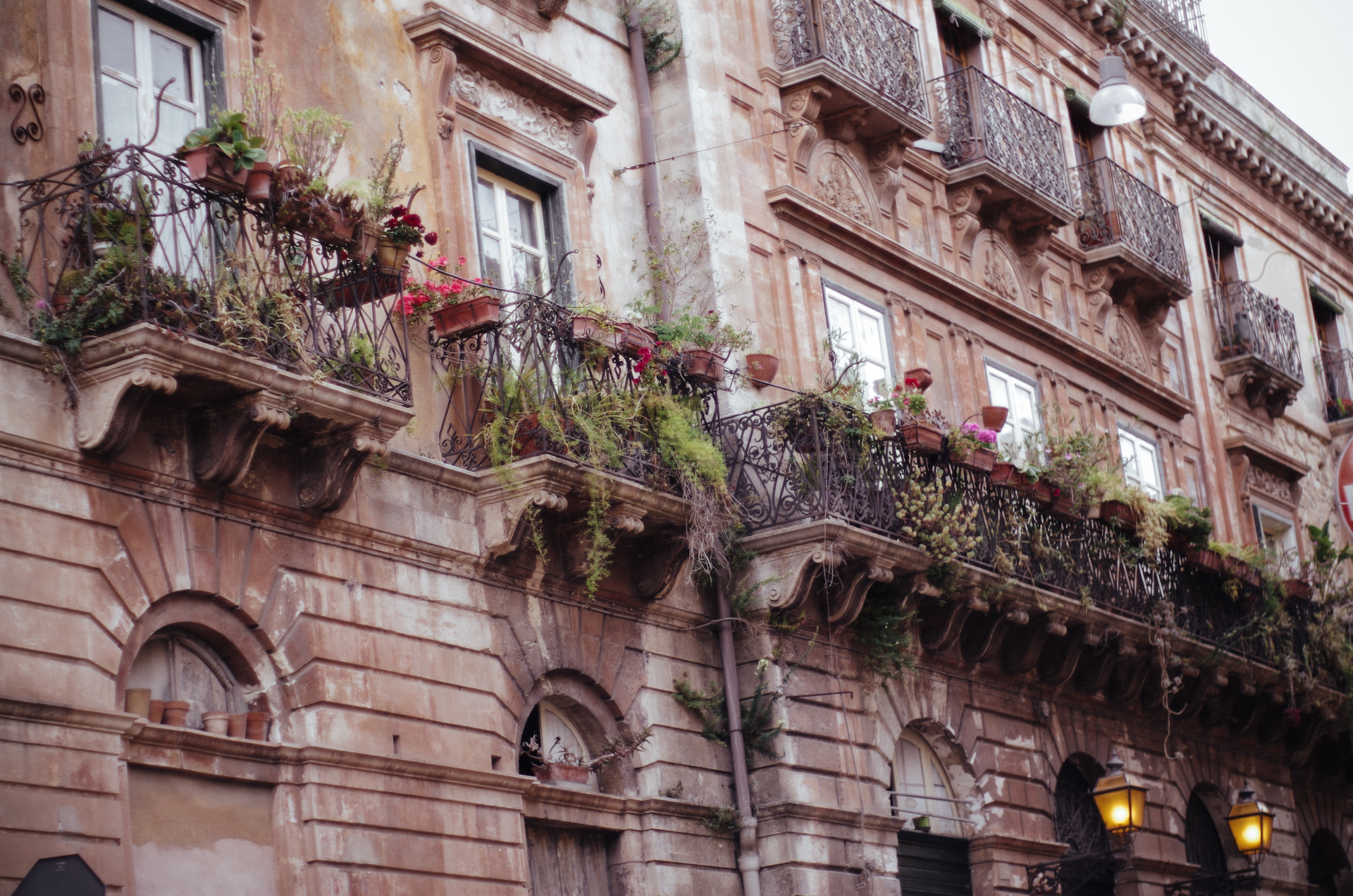 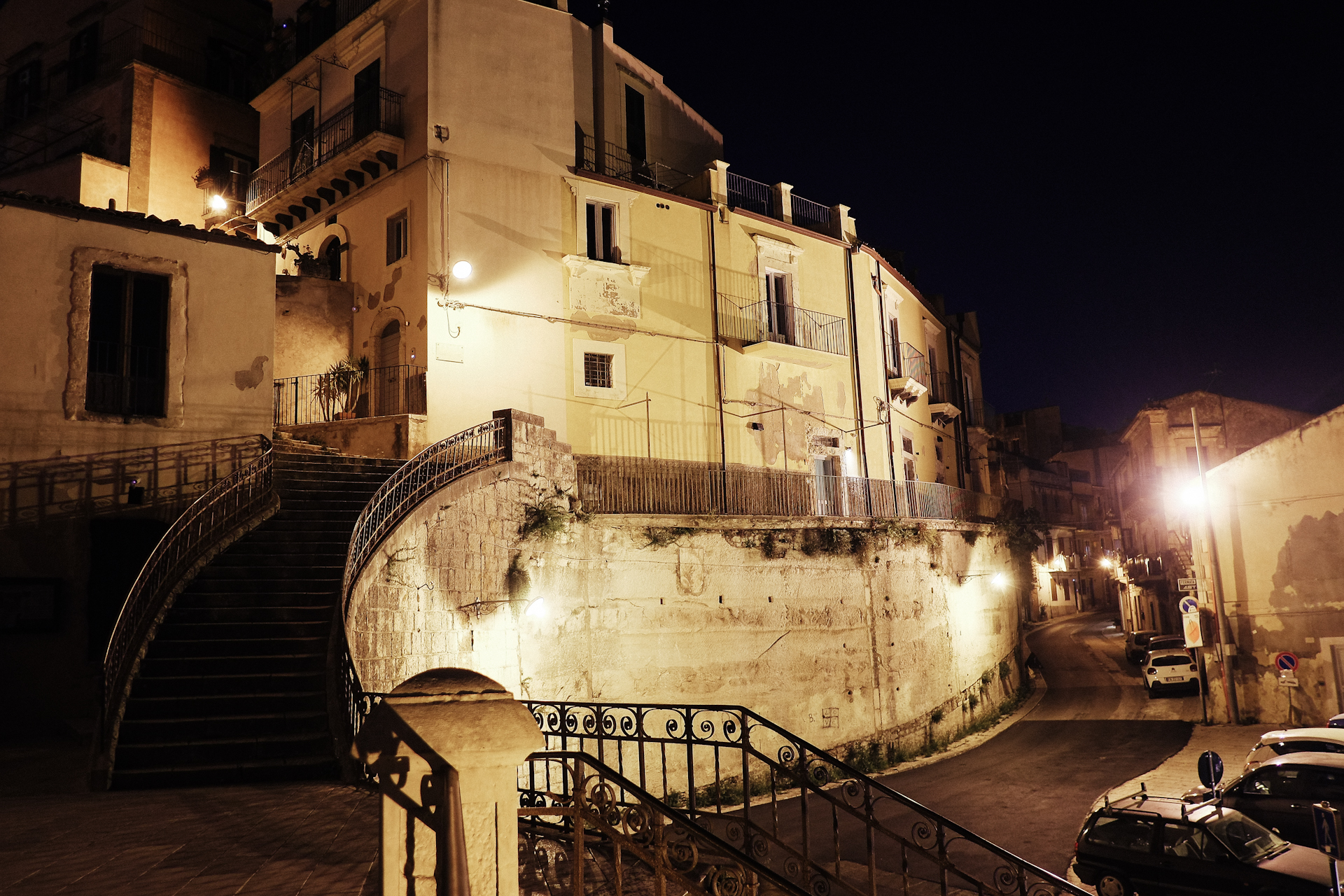 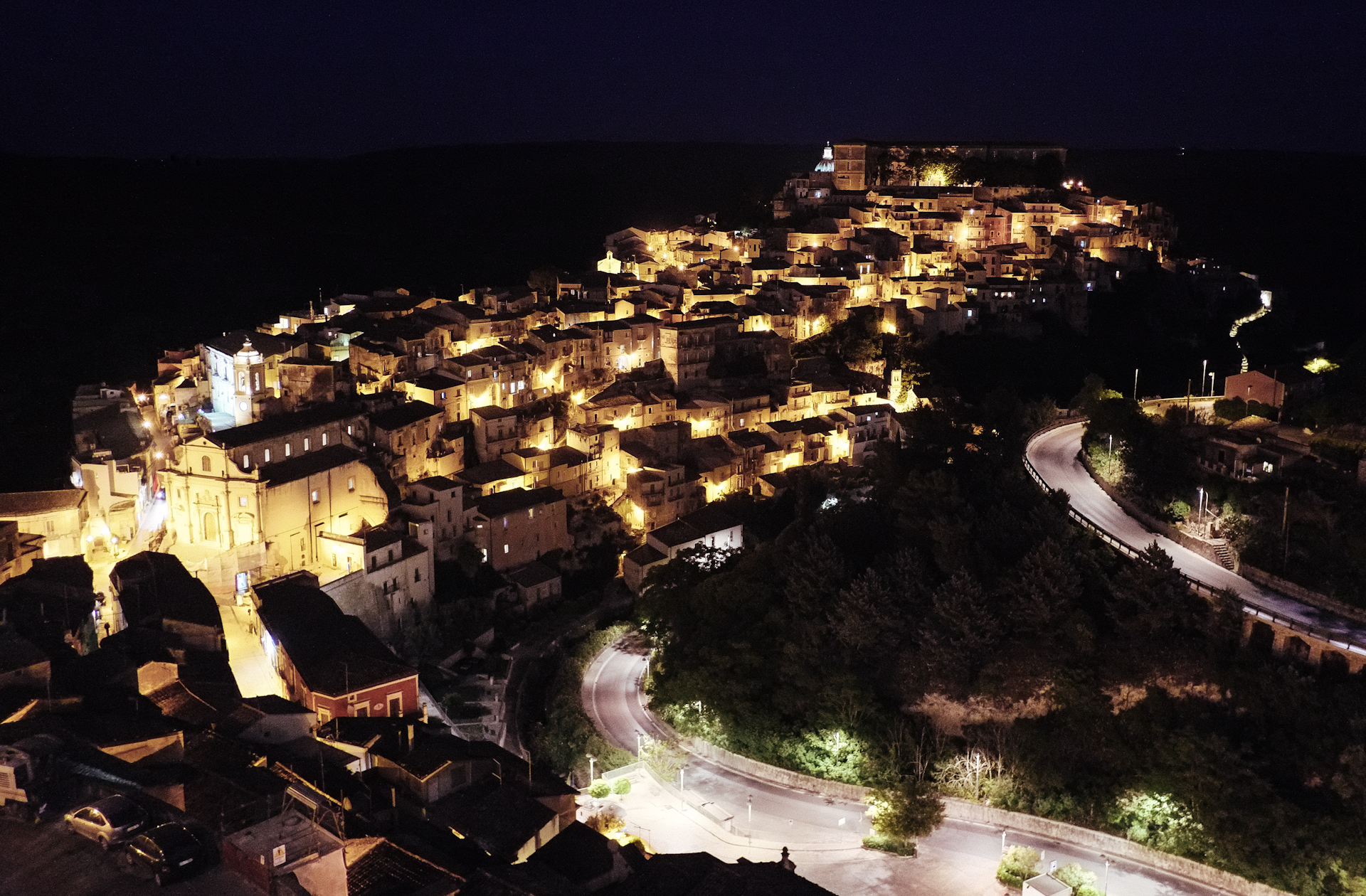 We were already accommodated in Modica for a couple of days when we drove to Ragusa one evening to have dinner and do some sightseeing. This is what I wrote in my travel diary that evening:

It is amazing how quiet both Modica and Ragusa, these stone cities spread across the hills of Sicily, are. I see cars moving along the narrow streets every now and then. I see cars parked in front of residential buildings. The lights are off inside and there is hardly anyone on the street. Perhaps everyone stayed in Noto. This makes Modica and Ragusa even more appealing to me. The lack of tourists and the discretion  – mystery almost – with which Sicilians are on about their lives are sometimes leaving me with the impression I am in a ghost town.

Alone on the street, among ornate stone buildings, you can almost visualize life in these cities hundreds of years ago: people in long, dark gowns, sliding up and down the steps, food baskets in their hands, the echo of church bells, the smell of markets. This is a rare thing. To travel to a holiday destination and afford the luxury to be by yourself, hardly anyone around.

We were having dinner at a table outside. Gazing at the buildings with no lights at the windows and the almost deserted streets, I was suddenly unable to shake the realization those very buildings and those very streets – and us, there – were lying somewhere in the middle of the sea. Where they ended, the water began. I blamed the wine.

And yet, what were people in Ragusa doing every day? I could only see myself living in a big city, a cosmopolitan life, with cafes, cinemas, and people to watch. I could not imagine living in Ragusa. Not the kind of life I am used to. So I tried to think of something else. It’s not that I was planning to move there anyway.

In the next post, I will share my experience in Modica, in my opinion, one of the most beautiful towns in Sicily, including the astonishing place – and garden! – we were lucky to call home for four unforgettable days.

I have been there twice and such a great place. Really had a blast.